Thanks, we needed that? 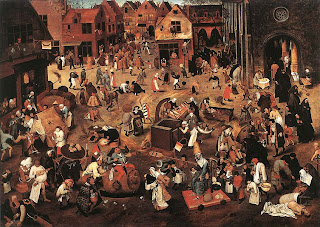 Begun, the religious blog wars have:

Blogs and other media outlets have recently been buzzing with stories about "rifts" on the religious left.

There is some vigorous give-and-take, that's for sure. Some self-identified liberals are charging that especially some newer, progressive organizations are really "centrists" in disguise.

NB: when a liberal calls you a centrist, ordinarily that's not a compliment.

I'll be clear. I'm in favor of reaching out and I am less interested in labels. To me as a person of faith, I believe we should be engaging the public square in order to effect change. In order to effect change, you have to engage in the broadest possible coalition-building. To use a sports metaphor, the point of a football game is not to perfect the huddle, it's to move the ball down the field.

"Labels," of course, are an inevitable and necessary evil, because....well, we are human beings and can't function without our well-defined boundaries!

So, isn't it a good idea to try to move the center back more toward, well, the center? How do you do that? You do that by building bridges, building trust and building a movement. Movements move. It's risky, it doesn't always work out, but it's how change happens.

Among people who self-identify as liberal or progressive, there should be room for diversity of opinion on how to best effect the change we need. And really, if we can't honor diversity, aren't we betraying that fundamental principle of historic liberalism?

Maybe...but before we can do that, we need labels! Lots and lots of labels!

Not for the first time and probably not the last, I am going to steal a bit from Woody Allen, this one about a surprise reincarnation:

"Take Phil Pinchuck. The man keeled over with an aneurysm, he's now a hamster. All day, running at the stupid wheel. For years he was a Yale professor. My point is he's gotten to like the wheel. He pedals and pedals, running nowhere, but he smiles."

Happy hamsters, as it turns out, remind me a great deal of nominally liberal religious centrists, who spend their time chasing after the elusive goal of compromise on social issues.

It seems like a good life. Lord knows they don't lack for friends or attention. All they have to do is pedal and pedal.

They smile while they do this, and some of them dream that if they could only run the wheel in reverse - just a little bit - to forge a post-ideological "strategic alliance" the path to forward motion would open up before them.

And really, what's not to like about giving a little to get a little? After all, according to Susan Brooks Thistlethwaite, it's the "broadest possible coalitions" that get things done. What could be wrong with that?

Get it? Some people are happy hamsters, because they use the wrong labels!

Labels will bring us peace in our time!

Sorry, Debra Haffner; you do good work, but you don't get to decide I'm not a progressive:

No true progressive would advocate any strategy to make abortion services more difficult to obtain....

So I say to my colleagues across the religious spectrum: Join me in supporting sexual justice, or stop calling yourself progressive.

Yes, she's perfectly clear: if I embrace a progressive position on everything except one of her pet issues -- just one -- I don't have the secret handshake and must climb down from the progressive treehouse. Presumably she'll be sticking out her tongue at me on the way down.

You can't fool me! It's labels all the way down!

More importantly Thistlethwaite begs the question. Is the problem primarily strategic? Have progressives drawn any issue lines? They are not working with the far, far right. Not with the Family Research Council, or Focus on the Family or that ilk. Would they make common ground or cause with these groups or leaders who held similar views? If it were 1958, would religious leaders who were racist as opposed to sexist be appropriate partners on health care? On the other hand, liberals have not eschewed single issue alliances in which differences on other issues bar a full scale partnership. We have worked with environmental groups, even when their positions on population control disturbed us or the lack of a justice frame that honored the needs of people of color was problematic.

The fact of the matter is that there are very serious value differences among the various parties to both liberal and progressive religious advocacy. We have different bottom lines. Thistlethwaite speaks of the danger of common ground resulting in a lowest common denominator value base, promptly moving on as if it is a given that this has not become a problem. Some of us think it has.

Even as groups like Faith in Public Life work to position themselves as centrist, though, much of their work clearly benefits Democrats.

I mean, you can't mix labels like "centrist" and "Democrat"? C'mon, that's so pre-9/11! By the way, it was Faith in Public Life that really started this:

Faith in Public Life helped facilitate a dialogue between high-profile evangelicals and secular liberals to find common ground on hot-button issues like abortion. The project culminated in the release of "Come Let Us Reason Together," a purported road map for ending the culture wars, and a meeting with White House aides.

Nice work, huh? And they say God doesn't have a sense of humor. Or rather, they say if you want to make God laugh, tell God your plans. So, does that mean God is laughing at us? Or near us?

I was watching "Catch Me If You Can" last night, on cable TeeVee, and once again regretting I'd missed a pretty entertaining movie when it was in the theaters (not as entertaining as a blog war on religious labels, but not bad, otherwise). One of the quirks of Leonardo Di Caprio's con man chacater was to peel the labels off of bottles (there was probably a reason for this explained early in the film; I missed the beginning). He kept 'em, stuffing them in his wallet. That's probably a pretty good sermon illustration for this topic, if only I knew how to work it in....

P.S. Speaking of God's sense of humor, one of my day jobs puts this in front of me, quite serendipitously. It gets better: Gustav Niebuhr is the great-nephew of Reinhold, great-grandson of H. Richard.

God is at least laughing behind me.


(the links are all courtesy of Pastor Dan. Credit where credit is due. Now, since I don't have a dog in this fight, I'm going to go bet on Michael Vicks in a football game, or some equally fruitful use of my time.)