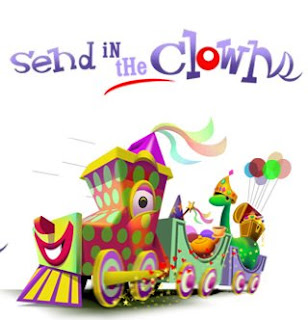 I was going to tie this:

WE don’t like our evil to be banal. Ten years after Columbine, it only now may be sinking in that the psychopathic killers were not jock-hating dorks from a “Trench Coat Mafia,” or, as ABC News maintained at the time, “part of a dark, underground national phenomenon known as the Gothic movement.” In the new best seller “Columbine,” the journalist Dave Cullen reaffirms that Dylan Klebold and Eric Harris were instead ordinary American teenagers who worked at the local pizza joint, loved their parents and were popular among their classmates.

On Tuesday, it will be five years since Americans first confronted the photographs from Abu Ghraib on “60 Minutes II.” Here, too, we want to cling to myths that quarantine the evil. If our country committed torture, surely it did so to prevent Armageddon, in a patriotic ticking-time-bomb scenario out of “24.” If anyone deserves blame, it was only those identified by President Bush as “a few American troops who dishonored our country and disregarded our values”: promiscuous, sinister-looking lowlifes like Lynddie England, Charles Graner and the other grunts who were held accountable while the top command got a pass.

We’ve learned much, much more about America and torture in the past five years. But as Mark Danner recently wrote in The New York Review of Books, for all the revelations, one essential fact remains unchanged: “By no later than the summer of 2004, the American people had before them the basic narrative of how the elected and appointed officials of their government decided to torture prisoners and how they went about it.” When the Obama administration said it declassified four new torture memos 10 days ago in part because their contents were already largely public, it was right.

Yet we still shrink from the hardest truths and the bigger picture: that torture was a premeditated policy approved at our government’s highest levels; that it was carried out in scenarios that had no resemblance to “24”; that psychologists and physicians were enlisted as collaborators in inflicting pain; and that, in the assessment of reliable sources like the F.B.I. director Robert Mueller, it did not help disrupt any terrorist attacks.

Together with this, from an e-mail I received recently:

Attached is the Homeland Security Report on "Rightwing Extremism" that has made the news lately. It is intended to discuss radical groups that evoke hatred against certain groups (abortion rights advicates, [sic] immigrants, etc.) using unique current socio-political and socio-economic conditions (our first African American President and the poor global economy) as a foundation for this hatred. On the face of it, I don't have any problem with Homeland Security raising awareness on the rise of the activitiies [sic] of these idiot extremists. White supremist [sic] hate-mongers are as dangerous to our freedoms as the gun-control advocates ever thought about being. However, I can see where the net this report casts implicates any strong "right wing" advocate as a "potential terrorist threat", not just extremist groups. I myself, can identify with these concerns about our government's intrusion into private rights and the potential to undermine capitalism in favor of socialism. The real question in my mind is at what point in time during the evolution of a socialistic or tyrannical government does a true patriot willing to defend the principles of the country he/she loves become a "radical extremist/terrorist"? Where would Thomas Payne have been categorized in this report 233 years ago?

I also worry that the peaceful demonstration of the frustration with the way things are such as last Wednesday's "tea parties" across the country were not worthy of hardly any prime-time media coverage from the "alphabet networks". I guarantee you that if those demonstrations had been focused on the rights of a particular ethnic group, pro-abortionist or other entity, these networks would have been all over it. I would have found it much more gratifying and credible had this Homeland Security Report discussed the potential for the mainstream media's absolute sheltering of any criticism of the current governmental policy changes to also be a factor in promoting extremist actions due to the frustration such biased reporting causes.

Together with this tale from Columbine, a link to Scopes from another e-mail I received the other day. The interesting wrinkle is the preamble to the e-mail included the Snopes link, and even noted this "message" has been around since 1999. But the e-mail still insisted that despite Mr. Scott's "rambling opinion that gun control laws wouldn't have stopped the Columbine High School shootings, and that those shootings were somehow related to a lack of religion in schools," that: "Regardless, seems the statement of Darrell Scott articulately says enough about the real issues!!!!" Which would be, somehow, the lack of religion in schools and how that relates to gun violence. (Even as the Texas Legislature is considering allowing a new exception to its concealed handgun laws, to permit students and faculty and parents to bring guns to college classes, for "safety.")

What ties all of those together? This:

For the most part, we've failed so far. It was more than a little disheartening to learn of the crippling fear inside the newsroom of the New York Times, where editors and reporters were so afraid of offending, so afraid of anyone thinking that the newspaper was taking a side, that the news staffers refused to label globally outlawed practices such as waterboarding as "torture." On the same morning we learned about that wishy-washiness at our most influential newspaper, David Broder of the Washington Post was trying to argue that the torture story isn't about obeying the law, or about our national soul, but "cloaks an unworthy desire for vengeance." I believe what Broder is really saying is that it's impossible for him to believe that someone who lunches across from him at the Palm or the Capitol Grille is capable of what Frank Rich described as "the banality of evil," that someone who wears a nice tie or has a kid in Little League could condone or encourage unlawful, violent and sometimes even lethal acts -- acts which we are now learning were carried out to achieve the dubious political ends of our leaders.