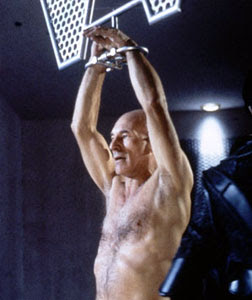 We keep circling 'round the central question of torture as a form of interrogation, and that is:

What do we know about interrogation?

Any lawyer who has ever questioned a client, much less a witness, will tell you that cooperation and conciliation works much better than bluster and animosity. You don't intimidate witnesses; you cajole them. I once questioned a witness in an administrative hearing. It was a bit nerve-wracking as I was used to confronting witnesses at trials after having taken their depositions; I knew what they were likely to say. Not so in this case; but the witness was brittle and pompous, and I found it easy to prove her grossly unreliable and foolish. I became a bit harsh, a bit aggressive. Not that it did a great deal for my client's case, but he loved the spectacle. The verbal "torture" I inflicted on the witness (it was hardly that, but as close as one gets in the legal system) delighted him so much he decided he didn't need me anymore when I couldn't do it again. My calmer and more persistent questioning better suited his case, but he wanted the fireworks and sense of triumph. He wanted, in short, what all clients think is best: to crush his enemies and drive them before him, to delight in the lamentations of their women.

This is pretty much what everyone seems to want, from the still out-pouring articles and TeeVee interviews and justifications for torture: all given by people with no experience in interrogating prisoners or getting information out of people who's just as soon not tell you anything. We would never allow torture in a criminal case or a civil case (it was once quite common) because we know it's unreliable. Except we don't know that, when we are told the informants are scary enough. Then, only torture will work.

At least that's what Michael Hayden and Dick Cheney keep saying. And, as Juliet Lapidos points out, this is a standard scenario of blockbuster movies, too. Whenever we want to underline just how vicious the "bad guys" are, we have them torture our "good guys," all in the name of getting information they'd never otherwise give up. Because kindness and blandishments won't work (they are, after all, bad guys, and our good guys know it!), and severe pain will...well, it will prove how tough our good guys are.

Except when it doesn't; as in the STNG episode Lapidos writes about, and from which the picture above is taken. Picard is absolutely broken by the torture; he confesses as much, at the end. And for what? What was the point? To extract information? Or to win a contest of wills? We know the answer. It is plain. Torture is not about extracting information. It is about the raw use of power, about holding someone helpless while you inflict cruelty and savagery upon them. Dick Cheney insists otherwise:

Cheney said that by getting rid of the enhanced interrogation techniques and the Bush adminstration's surveillance program, "you reduce the intelligence flow to the intelligence community upon which we based those policies that were so successful."

But we may soon know whether or not that is true. Even so, it's the utilitarian argument, and loathsome for that reason alone. It is troublesome we are even discussing the issue. How many times do we have to point out:

The point of torture is to violate the integrity of the human person and to coerce the will itself.

Above all, we don't torture because we are not monsters. Well, some of us are; but that's why we have laws. That's why the situation of Robert Bolt's "Man for All Seasons" applies here, too. We must give the devil the benefit of the laws; but we must also hold the devil to account under those laws. God demanded of the Hebrew prophets that even God be held to account under God's law. We can do no less for the former Administration officials who committed these crimes against our own humanity.