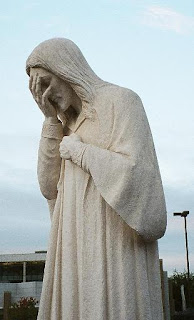 The more often Americans go to church, the more likely they are to support the torture of suspected terrorists, according to a new survey.

White evangelical Protestants were the religious group most likely to say torture is often or sometimes justified -- more than six in 10 supported it. People unaffiliated with any religious organization were least likely to back it. Only four in 10 of them did.

And dig a bit deeper:

The religious group most likely to say torture is never justified was Protestant denominations -- such as Episcopalians, Lutherans and Presbyterians -- categorized as "mainline" Protestants, in contrast to evangelicals. Just over three in 10 of them said torture is never justified. A quarter of the religiously unaffiliated said the same, compared with two in 10 white non-Hispanic Catholics and one in eight evangelicals.

One could say that those who attend church regularly and sit through Protestant worship especially, are inured to pain and endurance and so less concerned with the sufferings of others; but that would be unkind. And, to be fair, looking at these charts, the distinctions between those who attend church weekly, monthly, or never, seem almost statistically insignificant (it goes from 51% with some kind of support down to 42%). What's appalling, to me, is that even 42% of Americans seem to support torture. On the other hand:

The analysis is based on a Pew Research Center survey of 742 American adults conducted April 14-21. It did not include analysis of groups other than white evangelicals, white non-Hispanic Catholics, white mainline Protestants and the religiously unaffiliated, because the sample size was too small.

So the whole thing may be perfectly meaningless. Still, the correlation between evangelicals who still prefer their sinners to be in the hands of an angry God, and mainline Protestants, is interesting. And saddening.*

Sometimes I'm not sure we worship the same God at all.

*Perhaps I should note that Jonathan Edwards was a Congregationalist, a church now largely a part of the United Church of Christ, itself hardly an "evangelical" denomination, as that term is currently used. It's also interesting, despite his fire and brimstone theology (which I reject), that his reading of the Deuteronomist is essentially mine.