You say you want an evolution, well you know, we all want to change the world.... 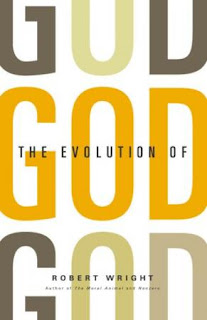 To the praises of this book, let me add: "Utter crap."

Wright's thesis is plain first from the title: "Evolution" equals, not biological change in species over time, but "progress," "improvement," "advancement." And "progress" comes not from some metaphysical deity, but from "enlightened" human beings. In a nutshell, Jesus and Mohammed were tribalists who fiercely defended their own groups and didn't give a wet snap for charity or egalitarianism or most of the other finer attributes ascribed to Christianity and Islam (one wonders if they were, instead, responsible for all the violence done in the name of the religions they founded, while all the good is the result of anonymous human beings with no touch of divinity in them at all). Let me take one example, which Wright deals with in a single paragraph: the parable of the Good Samaritan.

According to Wright, it isn't authentic at all, because it isn't found in either the Gospel of Mark or Q. True enough; the parable is part of what Biblical scholars call "Special Luke," as it is found on ly in Luke. But most scholars, including the highly skeptical Jesus Seminar, agree it is original to Jesus of Nazareth, because it is such a striking tale of a morality that transcends tribe and social group and all the silly designations we use to decide who we must care for, and who we can ignore. Wright, however, is not fooled by such things, because he has already decided, using Mark's gospel as his Rosetta Stone, that Jesus of Nazareth was actually a rather nasty and narrow-minded tribalist who cared only for the sons and daughters of Abraham, and probably didn't care much for them. So all that "love your neighbor" stuff was added by unknown human beings long after the supposed Son of God was dead. In Luke's case, almost a century after. See? "Evolution" is a moral function, and it works in people but not because of "gods." So the evolution of "God" is actually the "evolution" of people, who get better and living together and getting along with each other because it's a biological imperative, or simply because we learn over time and have insights that are utterly human, and this is all true because the Gospel of Mark is the oldest gospel and therefore the truest, and it reveals, upon careful Wrightian examination, a picture of Jesus of Nazareth that actually makes him quite a wanker.

Yes, that's it. I'm not making it up. The passage dismissing the parable of the Good Samaritan as the work of Jesus of Nazareth runs for about three sentences, no more. A parable that has provoked volumes of analysis and been subjected to scrutiny by skeptical Biblical scholars for almost 200 years now, is dealt with by Mr. Wright in about three sentences, maybe four. And he settles the matter once and for all.