Who mourns for language games? 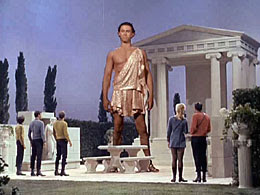 No, I don't get frustrated by claims that Obama wants to establish "death panels" to rid us of costly seniors (whose real concern is that they live for decades after retirement, and fear they are useless and unwanted), or of claims Obama is not an American citizen (where did that one go, anyway? Buried under it's own incredibility, I suppose). As Rick Perlstein points out, crazy has always been with us, at least in American politics. Rather, I get frustrated by the reigning question of religious belief, the one that has been imposed on us since at least the 19th century:

One of the five leaders is Archbishop of Canterbury Rowan Williams. Of his belief in God he says:

It's actually a good answer, because faith is nothing more than trust. "Faith" is another term that has been warped into something akin to blind credulity or, as Williams James described it, "Believin' what ain't so" (although, as James tried to point out, that is not the only definition of "faith" at all). The assumption behind the question put to the Archbishop is that existence is a thing that can be known, just as any object can be known. But even David Hume had trouble with that claim. His analysis of the self taking in all the sensory input which, he claimed, is all we know and all we can know, was that there was no self, since he (himself!) couldn't observe one. So all those observations just--"and then a miracle occurs!"--added up to an illusion of a self. Which doesn't go very far to explain how those stimuli add up to perceptions, much less how those perceptions add up to the illusion of selfhood. But since existence itself is not subject to empirical analysis, it's generally not deemed worthy of empirical study, either.

After all, what is the science of being? Indeed, Western philosophy has split on this very issue. Anglo-American philosophers by and large eschew the subjects of interest to "Continental" philosophers, and continue their pursuit of empiricism and pragmatism (empiricism's cousin). Continental philosophy is much more interested in questions of phenomenology, which have to do with the almost undecidable (and sometimes indecipherable) questions of "being." While the question "Does God exist?" assumes a simple definition for the word "exist," Martin Heidegger spent a lifetime trying to define the word and explain just what "being" is.

Kierkegaard tackled this subject head on, pointing out we can never prove the existence of Napoleon, except by establishing an historical record of events connected to someone identified as Napoleon (and S.K. fits into the Continental/phenomenological branch of Western philosophy). As Johannes Climacus puts it:

The works of Napoleon, in other words, don't establish Napoleon's existence unless I have already concluded that Napoleon does, indeed, exist. And as for the existence of God? Well, first, you have to posit that God is possible.

But then, what are the god's works? The works from which I want to demonstrate his existence do not immediately and directly exist, not at all. Or are the wisdom in nature and the goodness or wisdom in Governance right in front of our noses? Do we not encounter the most terrible spiritual trials here, and is it ever possible to be finished with all these trials? But I still do not demonstrate God's existence from such an order of things, and even if I began, I would never finish and also would be obliged continually to live in suspenso lest something so terrible happen that my fragments of demonstration would be ruined. Therefore, from what works do I demonstrate it? From the works regarded ideally--that is, as they do not appear directly and immediately. But then I do not demonstrate it from the works, after all, but only develop the ideality I have presupposed; trusting in that, I even dare to defy all objections, even those that have not yet arisen. By beginning, then, I have presupposed the ideality, have presupposed that I will succeed in accomplishing it, but what else is that but presupposing that the god exists and actually beginning with trust in him.

The question, you see, makes a category error. Does a platypus exist? Well, if you mean by that is a platypus an animal that can be identified, an object that can be classified as "animal" and sub-catetogorized down through the Linnean system, then, yes, it "exists." But if you ask "Do you (your humble host) exist?", you mean something quite different, although you've used the same word in seemingly the same way. Except you haven't, of course. When you ask "Does a platypus exist?", you are asking whether the animal identified as "platypus" is or has been alive in the world. When you ask "Do I exist?," you are asking "Do I have being?" And to ask that is to assume the answer in the question; or at least to assume a definition of "being" that includes a definition of me so that I can have being.

There are really two problems here: one is empirical, one phenomenological. Empirically, an animal identifed as a platypus can be located in the world. Phenomenologically, whether the platypus has being is a matter of definition, for both being and the platypus. As Kierkegaard explains it:

The thing in my hand can be identified (labelled, if you prefer) as a stone. That does not prove its existence, it simply gives an object a name. Neither do I prove the existence of a person; I simply identify them by name or by societal placement (a "criminal"). How do I ever demonstrate the being of the platypus, or the criminal? And how do I define "being" so that it doesn't include the stone, but also excludes a corpse? Indeed, how can you be sure I'm not simply a clever Turing test? Or that my name doesn't identify the writer of these posts? One might as validly assert that my social security card, or my diplomas, assert my existence. But all they prove is that pieces of paper with a common name are objects in the world that can be known empirically. When I die (i.e., cease to exist), they will still be objects in the world. But if they exist, how can I not exist? Easily, of course; but clearly those pieces of paper don't establish my existence.

If I am the Invisible Man of the Silverberg story, do I exist? Well, yes, and no; and what a pitiable state that would be. If I proclaim my existence and no one acknowledges it, do I cease to exist, like Apollo on Star Trek? Well, if you posit that to be the god's existence, yes. But if you don't....

The problem is not Rowan Williams' answer to the question, it's the question. The best response, actually, would be to ask the interlocuter: "Do you exist?", and when they said yes, ask them to prove it.

The result would be quite diverting.