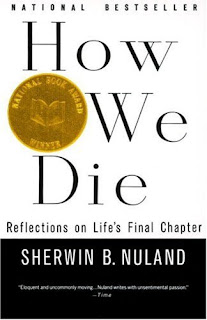 I read this book in seminary, and frankly haven't given much thought to it since. It may be that the current debate of "death panels" is going to return us to an infantile state as a nation of hiding under the covers when the thunder rumbles, although I really don't think the situation is that dire. I seem to recall only a week or so ago the "birthers" were going to undermine Obama's presidency if he didn't do something, and he didn't. I'm still not convinced the "deathers" have any more credibility, and the only response to them seems to be either to punch the tar baby (because no matter what you say, they'll say (a) you're a liar or (b) make up a new lie), or effectively ignore it, publish the truth, and wait for the opposition to collapse under its lies.

Or we can talk about death. Funny that death is a favorite subject of entertainment (the latest "Final Destination" movie is advertised everytime I turn the TV on), but we can't talk about it. Or maybe not so funny; we clearly feel the same way about sex. I remember seeing a nude model advertising suntan lotion on sidewalk kiosks in Paris 33 years ago, and this week topless pictures of Sharon Stone on the cover of Paris Match created quite a buzz. A woman nearly spilling out of her dress is okay; a woman actually spilling out of her dress, ist verboten! We like sex in America, but we like to not like it, except when we do like it. Or something. Thinking about it too hard will make your head hurt. Everyone, especially at those town meetings, where the "sleeping giant" is being awakened, would probably also agree there is too much sex and violence in movies and on TV. Funny thing, though: Hollywood keeps turning to it, and we keep pumping money into Hollywood's coffers.

So if all those people at the town meetings expressed their outrage over the sex and violence, who would they be speaking for?

AMA President J. James Rohack put it this way: "These are important discussions everyone should have so they are fully informed and can make their wishes known. That's not controversial, it's plain, old-fashioned patient-centered care."

Yup. It's pretty simple. The kind of thing people do every day. Usually when they have to, not when they need to.

It's another boundaries issue, which is one reason it is never discussed easily. Boundaries define us, especially in America. Boundaries between "us" and "the politicians in Washington," for example. Boundaries between class, race, social status; even between the living and the dead. It's no accident graveyards are no longer around churches, or that hospitals are places we only visit on special occasions, or that funeral homes are special buildings we never enter until we have to. Nobody ever put a funeral parlor or a hospital in a shopping mall. Healthcare and the end of life are not matters that we incorporate into our everyday existence anymore.

It used to be that a loved one died at home, and as kept there until the burial. This was largely a matter of economy, I suspect. Who could afford an undertaker and all those fees? But it was also a matter of respect. Who would join the deceased in the "preparation room" of a funeral home? You probably wouldn't be allowed to, and I know many people who shudder at the idea of an open casket at a funeral service. I even know people who don't want the service at the church they've attended all their life, because of the sad memories it would cause. It's a mistake to generalize about such things, but it says something about our unwillingness to make death a part of life. It was once the norm for someone to "sit up" with the deceased, until the funeral. It was indecent and unkind to leave the loved one alone. Now we can't wait for the undertaker to whisk away the "corpse," and sometimes we aren't sure we want to see it ever again. Gone are the days when family members lovingly washed the body, and dressed it, and truly paid their "last respects."

I don't know what happened. You can trace the modern attitude toward death back to Tolstoy's "Death of Ivan Ilyich," to some degree. Some of it is simply affluence, the ability to pay someone to provide services, as we pay someone to do our suburban lawns and fix our cars and repair our houses. This is not a harangue against the funeral industry, but more of a question:

What is it that so many people are so scared of? And why? Again, being a pastor, I see this as a spiritual problem, but I don't think I'm wrong to ask: what does it say about us, that we are so collectively so afraid, and so profoundly afraid of death? When and how did we convince our seniors, our elders, our friends and family, that they were so completely useless, that they should be the first to die in order to save society some money?

Are we truly that utilitarian? Are we secretly convinced the pleasures of Omelas depend on our early death? Have we devalued human life this much?