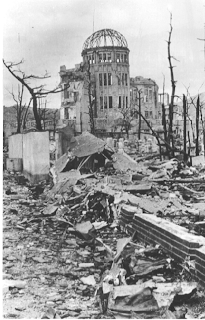 A few days late, but still:

Most Americans ever since have seen the destruction of the populations of Hiroshima and Nagasaki as necessary and effective—as constituting just means, in effect just terrorism, under the supposed circumstances—thus legitimating, in their eyes, the second and third largest single-day massacres in history. (The largest, also by the U.S. Army Air Corps, was the firebombing of Tokyo five months before on the night of March 9, which burned alive or suffocated 80,000 to 120,000 civilians. Most of the very few Americans who are aware of this event at all accept it, too, as appropriate in wartime.)

To regard those acts as definitely other than criminal and immoral—as most Americans do—is to believe that anything—anything—can be legitimate means: at worst, a necessary, lesser, evil. At least, if done by Americans, on the order of a president, during wartime. Indeed, we are the only country in the world that believes it won a war by bombing—specifically by bombing cities with weapons of mass destruction—and believes that it was fully rightful in doing so. It is a dangerous state of mind.

There is a direct line between that event, and its justifications, and "shock and awe" and the continued fighting in Afghanistan and Iraq. Technology won the "Good War." As Ellsberg points out, "progress" meant, and still mostly means, changes in technology; not in society (although we apply the term loosely to "evolution" now). Technology, however, did not, shortly after the "Good War," defeat the "little brown men in black pajamas," but we have convenient excuses for that, too.

Our faith in technology continues unabated; including the faith that technology, in the guise of computers and the internet, will finally usher in the millenia of peace, prosperity, and democracy. It was supposed to destroy Chinese totalitarianism; it will finally allow progressives to control U.S. politics; and it's supposed to lead to products being "free." Can food without price and wine bought without money be far behind?

Somehow I'm quite sure human culture will continue to lag behind our technology. "O machine! O machine!"