Of Jefferson and Wright 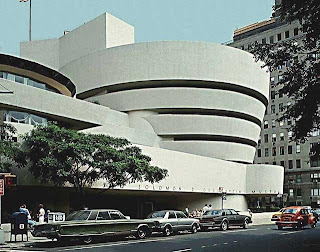 I have been traveling, so I find myself returned full of piss and vinegar, as the saying goes; or perhaps it should be I'm relaxed and thoughtful. Either way, this post by digby on Matt Taibbi put me in mind of the second most famous Frank Lloyd Wright building: the Guggenheim in New York.

We wanted to go there simply because I'd never been in it, and the building fascinates me. But the one day we got near it it was near closing time and the tiny museum (well, compared to the Met or MOMA or even the Whitney) was packed, and the line to get tickets alone would have taken 30 minutes to clear. So we just looked around for a moment and left. But I left wondering: what are all these people doing here? There was no "King Tut" level exhibition there. The Guggenheim isn't known for having the collection of the Met or the Whitney, both nearby. It doesn't have the design collection or even some of the more famous pieces of the MOMA. But it was jammed, and I understand it's almost always jammed on the weekends.

It's the building, obviously. That much admired, much maligned circular ramp that defines and some say, defeats the museum. Critics castigate the place, or admire it; 50 years later it's still a controversial structure. But not with the people; the people love it, they are drawn to it, they can't seem to resist it. They want to be inside such a work of art, such a fantastic piece of architecture. Why?

I can only guess, but maybe for the same reason people read Matt Taibbi, and still read Hunter Thompson, and mourned his death in ways nobody thought to mourn Walter Cronkite's. Maybe, just maybe, because there's some authenticity to Wright's buildings (some of them, anyway. I've been in the Price Tower in Bartlesville, OK, and it's just weird!). Taibbi may be opinionated and even a bit challenged in choosing his metaphors (a vampire squid attached to the face of America? Really? Hunter Thompson he isn't.), but like Wright's building, he has a vision, and he sticks to it. And while the critics may tut-tut, the demos, the polis, loves it.

Maybe they know something....