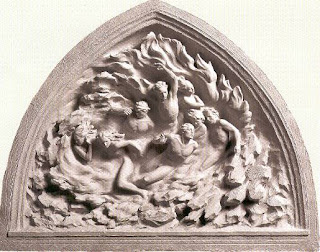 come on you guys. i know it's hard. but really, let's try to unpack this data in a useful way. which is simply: willful ignorance of their own creed, on the part of believers. actually reading the whole Bible could lead to doubt, contradiction, and dispute. it's why the RCC tried so hard to put it down in Luther's day, and why priesthoods of every kind cling viciously to the notion that "only properly trained tradents can tell the little people what the holy text really means." believers thinking for themselves = less money for temple con artists. you don't have to make much more complicated than that.

This comment from Chicago Dyke in the post below struck me as funny this morning because it contains so many misconceptions about seminary education, and about religion in general. What she says is actually truer about "Bible colleges" than seminaries; and is actually based on a very Protestant idea, not an originally atheistic one.

Martin Luther, as tradition has it, set aside the traditional alb (a garment worn by manual laborers in Roman times, it eventually became the uniform of the office of the clergy, who were hardly manual laborers by then. Ironies abound.) in favor of the academician's robe, to emphasize the teaching office of the clergy, especially in the pulpit. Protestantism's greatest break with the Roman Catholic church, in fact, was based on increased literacy among the populace. Luther was one of the first to translate the Scriptures into the vulgate again. Latin was the tongue of Rome when Jerome translated the scriptures from Greek and Hebrew into Latin, but it was the language of the church alone when Luther did the same thing. He wasn't trying to "tell the little people what the holy text means," he was trying to create the "priesthood of all believers." And yet the leaders of this Reformation were all well-educated men so they, like Luke, put an emphasis on knowledge and learning.

It was still sanctioned knowledge; but that was the culture. We have sanctioned knowledge today; things we agree are true (sex is good! Unless the participants are too young, then it's bad. Or unless commerce is involved, then it's dirty! Science must be taught in an unadulterated form. Math is good. English is good, too. And so on, and so on.) and things we agree are false. What changes is where the emphasis falls. But back to the priesthood controlling knowledge. There is no question that's one purpose of the priesthood. As Bernard Shaw observed, all professions are a conspiracy against the laity. However, Protestantism soon ran away from Luther's vision, and Calvin's (himself trained as a lawyer): Protestants began to protest against their fellow Protestants, objecting to, among other things, the idea that a pastor knew better who had been educated. Education, especially in England (where Elizabeth took over for the Pope in Rome and ruthlessly quashed not only the Catholics but, through her descendants, any Protestants in England who were not Anglican), became a sign of state control, not a source of true knowledge. Many Protestants began to insist on a baptism of the Spirit as a sign one was fit to be a pastor (one only need read Pilgrim's Progress to realize this. Bunyan's ability to read and write was about the only formal education he ever had.)

It's no accident that in the land where Bunyan's work was most likely to be found in every home, next to the Bible, that most popular and famous preachers today are products not of formal seminary training, or even a Bible college, but simply of baptism by the Spirit. Joel Osteen took over Lakewood Church when his father died; he has no formal education in theology or exegesis. Baptist ministers to this day can still be ordained without any seminary training at all (there is an historical split between Protestants, for those who require seminary training to be ordained, and those who don't. Even those on the pro-training side are not all uniformly rigid about the requirement.). And, of course, the most interesting historical quirk is, there is a direct line from Protestantism to the Enlightenment to modern atheism. The two, in fact, really are joined at the hip.

The idea of the priesthood discouraging examination of the Scriptures is a hoary shibboleth, and hardly an accurate one. Judaism, from what I understand, has a long tradition of teaching children (mostly boys, true) to read the holy scriptures. Those who are really interested can study the midrash, where the conversation gets really heated, and the arguments with scripture and other commenters fly freely.

The main revolution of Protestantism was to displace the institution in favor of the individual. Luther and Calvin just preferred other institutions, it's true (and so the revolution was actually meant to be just a reformation), but once the genie was out of the bottle, it was hard to get it back in again. Pilgrim's Progress and Piers Plowman are tributes to the individual against the mass (even against the nuclear family; Pilgrim leaves hearth and home, wife and children, in order to attain the Celestial City), and they disparage earthly knowledge as much as they reject religious institutions. That strain of anti-institutionalism is fierce in American religious culture, and explains the plethora of "mega-churches" and non-denominational churches, as well as ceaselessly splintering denominations. The very idea that priesthoods perpetuate themselves and mean to keep the laity in the dark didn't originate with Thomas Jefferson; his skepticism has deep Protestant roots, which is to say they are cultural as much as ecclesiological. The skepticism of the Enlightenment owes a great deal to the Reformation, and the opening of bodies of knowledge to ordinary people; who, of course, did as much good and bad with it as people are doing now with the internet. There's a great deal of wisdom out there among "ordinary people." There is also a great deal of rank stupidity and venal bigotry. The Tea Party in American politics owes its rise and coalescence and coherence (such as the latter is) as much to technology as it does to political circumstances. Which, most historians note, is equally true of Protestantism.

But the irony in ChiDy's observation that "believers thinking for themselves = less money for temple con artists" is the choicest of all. True, that line of thinking is claimed by atheists today, as it was by "free-thinkers" in the 19th century, as a sign that believers=benighted louts who cannot reason on their own (or freely, in 19th century jargon). But the very history of Protestantism belies this observation. There is a reason there are so many Protestant denominations, and so many non-denominational churches, and it is simply because of believers thinking for themselves. Congregationalist churches, loathing priests as they did, used to sit in judgment on the pastor during his sermons, and upbraid him after the Sunday service if they thought is exegesis unsound. At the turn of the 20th century there was a booming trade in mail order koine Greek lessons, so one could read the New Testament in the original tongue, unfiltered by translation committees. Thinking for oneself is as Protestant as rejecting the Roman Catholic church and all its trappings. The corollary, that all who think for themselves will be atheists or individuals, is the false assumption of the argument. One, purely from a human culture and sociological viewpoint, people like to be in groups of like-minded persons. It's one reason Richard Dawkins' has such a following, a following little concerned with his work on evolutionary biology (and indeed, little versed in it). "Freedom of thought" does not create a vast sea of Ayn Randian individualists wandering the landscape asserting their independence at every turn. It produces another group of like-minded people who join together, either formally or informally, and discuss what they have in common, reinforcing with each other the soundness of their reasoning, the rightness of their opinions; sometimes, even, the superiority of their point of view. There is little difference between the believer who asserts his religion above all others, and the atheist who asserts she alone knows the truth because of her superior knowledge.

It may not have been necessary, in a purely logical world, for Protestantism to have led to modern atheism. There may be no necessary connection between the tenets first espoused by Calvin and Melancthon, and the attitudes of Christopher Hitchens and Sam Harris. But there is certainly an historical one, and it is impossible to be intellectually honest and not recognize the debt modern atheists owe to Protestant thinkers of 5 centuries ago. Atheism, as I have said before, is a product of a Christian Western, culture. It is no more ex nihilo or sui generis than the universe it claims is not the product of a Creator.

And, of course, the harsh fact is, if you really want to be in the spotlight losing your religion: go to seminary. A "Bible College" that will reinforce your most superstitions opinions, it ain't.