"Work out your own salvation with fear and trembling...." 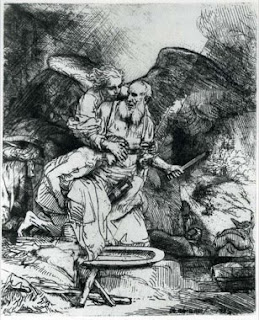 But what does it mean to share a secret? Here it isn't a matter of knowing what the other knows, for Abraham doesn't know anything. It isn't a matter of sharing his faith, for the latter must remain an initiative of absolute singularity. And moreover, we don't think or speak of Abraham from the point of view of a faith that is sure of itself, any more than did Kierkegaard. Kierkegaard keeps coming back to this, recalling that he doesn't understand Abraham, that he wouldn't be capable of doing what he did. Such an attitude in fact seems the only possible one; and even if it is the most widely shared idea in the world, it seems to be necessitated by this monstrosity of such prodigious proportions. Our faith is not assured because a faith never can be, it must never be a certainty. We share with Abraham what cannot be shared, a secret we know nothing about, neither him nor us. To share a secret is nothing that can be known, nothing that can be determined. What is a secret that is a secret about nothing and a sharing that doesn't share anything?

Such is the secret truth of faith as absolute responsibility and as absolute passion, the "highest passion" as Kierkegaard will say; it is a passion that, sworn to secrecy, cannot be transmitted from generation to generation. In this sense, it has no history. This untransmissability of the highest passion, the normal condition of a faith which is thus bound to secrecy, nevertheless dictates to us the following: we must always start over. A secret can be transmitted, but in transmitting a secret as a secret that remains secret, has one transmitted at all? Does it amount to history, to a story? Yes and no....

But there was no one who could understand Abraham. And yet what did he achieve? He remained true to his love. But anyone who loves God needs no tears, no admiration; he forgets the suffering in the love. Indeed, so completely has he forgotten it that there would not be the slightest trace of his suffering left if God himself did not remember it, for he sees in secret and recognizes distress and counts the tears and forgets nothing.

Thus, either there is a paradox, that the single individual stands in an absolute relation to the absolute, or Abraham is lost.

Jacques Derrida, The Gift of Death (2nd edition), tr. David Wills. Noted in passing, in response particularly to this:

Traditional religion, which does not measure the value of an argument by the date or by fashion, is not deterring progress. It is deterring decay.

Civilization partly consists of teaching men and women to say "no" to desires that are not productive or useful to their souls. What is productive? First, we would have to know the facts about the cosmos. Is there an afterlife? Is there a God? Does He have opinions on what we do?

There is, He exists, and He does. And if He has been clear on anything it is that human beings are good at kidding themselves into bad behavior when it comes to physical desires. Some pagan cultures believed all sex was bad and it became fashionable to castrate men in order to "restrain" desires. The Christian church had to stand against such behavior, which even infected its own ranks, and argue against the intellectual fashion of the day.

Our reward was to be murdered by the government on the pretext of condoning depravity!

In this age, Christian morality is once again unfashionable, but this time not for our tolerance of sex, but our intolerance of some forms of sex. If some ancient intellectuals saw sexual desire as an unspiritual horror, we now face a culture that in part believes it is a necessary part of life!