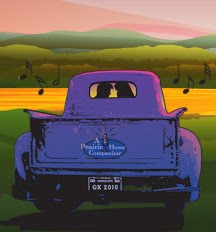 I had an epiphany of sorts last night, watching Garrison Keillor on the "cinecast" of A Prairie Home Companion. He was talking about being young and wanting to change the world, and then getting older, and wanting to just get along with the world, realizing in fact that the best change you could make for the world was to leave it be. And suddenly I thought about Kant.

Not the most logical connection, you're thinking. But Kant was a quiet professor in Germany, until he got hold of David Hume's ideas late in his life. I thought about it, and realized how many philosophers and theologians and artists, businessmen, activists, you name it, even saints, are driven by the youthful desire to change the world, to leave their mark on it, to alter the world for the better. And too late did they learn, (if they learned it at all; it's said Hume concluded from his philosophical musings that nothing valuable could be known or shown, and we were better off spending our days just herding sheep. Wittgenstein, likewise, was none too pleased with the process of philosophizing, and the muddled results it created. He, too, wanted to explain the world in his Tractatus; he spent the rest of his life trying to explain the Tractatus.); too late did they learn, as I started to say, that the world was better left alone. Kant, however, couldn't leave the world alone; not after Hume, and not even in his old age.

Kant couldn't leave the world alone because, after Hume, there was no world left to leave alone. Kant couldn't leave the world alone, because he had to resurrect the world. He had to recreate it. He had a reconstruction job to do. Hume, having started out like all ambitious young men, determined to understand the world truthfully, and thereby to improve the lot of humankind, if only so they would know the truth and the truth would set them free, ended up destroying the world. It fell to Kant to put Humpty-Dumpty back together.

This is not unusual in the history of philosophy. Soren Kierkegaard's 'master's thesis' (roughly the equivalent of what we think of as such, anyway; although it was far closer to a modern Ph.D. dissertation) was about the destructive irony of Socrates, an irony that left the world swallowing its own tail. It was fashionable when I started reading Kierkegaard to understand is work as one long reaction to Hegel, when it wasn't about Regina Olsen. Now, with a broader view, perhaps we should see that Kierkegaard, like Kant, was trying to put a world back together. After all, had he not died young, he would surely have retired to a Danish pastorate and lived out his days quietly, haranguing only his congregation with his too big, too complex, too ornate ideas about the too abstract but too concrete concept of being.

There is an ebb and flow to the nature of things, a time for every purpose under heaven, as the song if not the Preacher, has it. There are the youthful ambitions to create, that end up too often looking more like destruction. And there are the banked fires of middle and old age, that to youth look like passionless ashes of failed lives; in reality, though, they may be the more fruitful. It may be that a certain kind of respect for the world as it is presented, rather than as we struggle to re-present it, is the most useful and progressive benefit of all. It may be that in leaving the world alone, or trying to put it back the way we found it (as we learned in kindergarten!) is the best way to make the world better.

Gonna have to think about that.