No more pencils, no more books.... 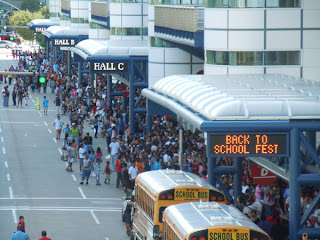 One issue not really addressed in this article about teacher cheating on standardized tests, is the powerlessness of the teachers.

Typically, teachers are the bottom of the pole in any school. As an adjunct, I have virtually no voice at all (not that I really want one). In a public school, even as a full time employee, if you are a teacher you are under the authority of the principal, the parents, the various directors in administration (depending on how the school is organized), the superintendent, and the school board. You want more authority? Get out of the classroom. It's that simple.

So "accountability" is all about blaming the weakest link in the chain for the failure of the chain. It's all about putting the onus of responsibility in the classroom. Seldom is it transferred to the offices where curriculum is decided on, or the school board, where policy is set. The ideas are always sound; it's the failure of the people to live up to the standards of the Big Idea that are always the problem.

You don't think so? Name me a problem with public education in America that hasn't been blamed on how teaching is done, rather than why it is done. "How" often starts out involving theory, but quickly ends up involving people: that is, teachers. "Why" is virtually sacrosanct (unless you want to argue about whether or not a book is to be allowed in a school library). "What" may be a subject of controversy, but it isn't usually the problem it is made out to be. No, the enduring question of education is "how," and that "how" is always based on the presumably democratic ideal that all students are created equal, and it is teachers who disorder and unequalize them. So the problem always comes back to teachers and what they do in the classroom, and the assessment is always of teachers and what they do in the classroom, and any assessment of administration or pedagogical theory or even school board policy is always left in the murky world of vague generalities about too many administrators (even as states like Texas pass new laws in every legislative session mandating more tests and burdens on school districts, all of which require more administrators to comply with) or "wasteful spending" (the current bugbear in Texas is the revelation that superintendents are being laid off to save money in school districts. But superintendents have contracts which must be bought out. Critics who know nothing complain this money should go to the schools. Of course, you want to fire someone under an employment contract, even with cause, and you guarantee a lawsuit with lots of money going to...lawyers.). The problem is never the idea of lesson plans or standardized tests or a pass/fail system that treats human beings like so many widgets. The problem is never the idea of education, it's always the execution of education. And that issue is always centered on the classroom, on the people at the very bottom of the educational system, the people whose entry point into the educational hierarchy is standing in front of a classroom, and whose rise in that hierarchy begins with getting out of the classroom. So the problem always comes back to teachers.

Rick Perry is a fine example of the problem. He wants to make college teachers "accountable" by making their jobs subject to student evaluations. Because, after all, the problem with a college education in Texas isn't the students, it's the teachers. Somehow I managed to get through college in Texas without blaming my teachers for my shortcomings, but now I should be free to blame them when I'm not interested, amused, entertained, enlightened, or educated. Perry's position kinda makes sense for a guy who could only manage two "A's" in college, and got a "C" in gym. Clearly if he'd been able to evaluate his professors, he'd have gotten better teachers and better grades!

So if the school board fails to set the right policies for the school district, if the administration fails to establish a proper curriculum for the schools, if the department fails to set the right guidelines for their students and picks the wrong textbooks and sets the wrong goals, if the principals fail to oversee their teachers, the only viable response is to blame the teachers for the lousy student evaluations, and find ways to replace those teachers with ones the students find more congenial. Until, of course, the next round of students come along in a year or two, and don't like that new group of teachers.

It's only fair to give credit where credit is due, and blame where it can least be rejected.