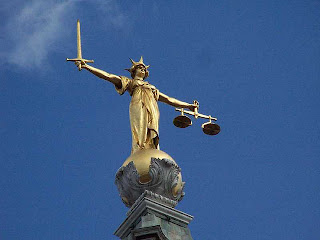 When I hear about this:

A 6-year-old Grant County boy has been accused of first-degree sexual assault after playing "doctor" with two 5-year-old friends.

And then consider that we have the highest percentage of our population in prison of any country in the world, I don't think this case is simply a problem of overzealous prosecution or "freaking out" about kids.

First, because it doesn't show up in the linked article, one relevant fact about why the "inappropriate touching" occurred:

"D" is 6-year-old child who previous to the alleged criminal act in issue, had medical issues that necessitated rectal examinations by medical personnel.

"D" is the child being charged with a felony. The girl involved told authorities they were playing "butt doctor," and no penetration occurred.

There is a political aspect to this case (plenty of info on that in the petition and elsewhere); but what interests me is the idea of criminalizing the behavior of others.

The parents of "D" are outraged at a six-year old being treated like a criminal, and well they should be. But who thinks a criminal prosecution of a six-year old is appropriate under any circumstances, and why? Well, apparently, people with the power to prosecute in a country where incarceration has increased 500% over the past 30 years (roughly the same time period that wages have stagnated for 80% of the population while rising for 20% of the population. Coincidence?) We have turned to criminal prosecutions to cure a variety of ills, so it's almost no surprise we would now criminalize "playing doctor" between small children.

Does it seem extreme to link this stupid case to the problem of incarceration? Well, some of this story is of a piece with the national story about prosecutions. Prosecutors love convictions, and not just because they hate criminals. Prosecutors, as this story amply shows, are political animals (not all politicians make sensible decisions in the name of politics). And this prosecutor, like many, obviously doesn't yet want to admit this prosecution is a mistake, or that a 6 year old boy is not an adult.

[L]egal scholars looking at the issue suggest that prosecutors’ concerns about their political future and a culture that values winning over justice also come into play. “They are attached to their convictions,” Garrett says, “and they don’t want to see their work called into question.”

That's from a NYTimes story about convictions being overturned by DNA evidence, and what lengths prosecutors will go to in order to protect their records. Prosecutors are political animals, and in a culture that values not just winning, but criminalizing behavior and punishing people with prison sentences, isn't it just a matter of time until that attitude is applied to children?

This prosecution is vile, rancid, egregious, and indefensible. As the attorneys for the parents point out:

"[The experts say] a 6-year-old child is unable to intellectually and emotionally associate sexual gratification with the act that D has been accused of committing," Cooper said....

And as they note in their lawsuit, a six year old boy is simply incapable of forming the mens rea (guilty intent, basically) necessary to charge him with a felony. That is simply hornbook law: without the mens rea, the act is not criminal. This is the basis for the "insanity defense" in some crimes: if the defendant didn't have the mental capability to form a criminal intent (if, for example, in a delusional state the defendant was killing in self-defense), there is no crime. Of course, for murder suspects who are "not guilty by reason of insanity," there is treatment instead of jail time. But six-year olds are not guilty by reason of the fact they are incapable of forming criminal intent, at least as regards a crime of sexual assault. This is why children are not charged like adults, or treated criminally like adults. It is absurd to charge a child with such an offense. But is it of a piece with the society we've become in the past 30 years? Do we feel so out of control that we are mad to be in control of someone, anyone? Chris Hayes opined over the weekend that if we see a loss of the "American Dream" (the idea that we will be better off than our parents), our politics would go bonkers.

I'm still wondering why he said: "If".