The World is Too Much With Us 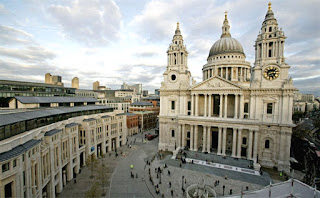 I have not been following the controversy over St. Paul's Cathedral in London as I should (Wounded Bird has been doing it admirably), and unfortunately as much of what I know is from BBC World Service (where I can never find links to what I hear, so I can't directly quote it here), but last night as I went to bed BBC was interviewing Simon Jenkins(?), who pointed out the Cathedral was a monument to power, not at all the kind of place Jesus would have wanted built, and it had an obligation to the poor. He mentioned that before the current Christopher Wren structure replaced it, the old St. Paul's had a special pulpit precisely for people to preach from or make speeches from, and that people gathered and argued and riots even broke out there, all in the name of free speech and democracy and airing grievances. So, he meant, there is a long tradition of the Church of England supporting the right of the common man to speak, and it was high time they returned to their senses and to that tradition, and paid attention to the poor rather than the powerful.

That, at least, is what I remember this morning.

Now the Archbishop of Canterbury has spoken:

Dr Rowan Williams said that the Church of England had a “proper interest in the ethics of the financial world” and warned that there had been “little visible change in banking practices” following the recession.

He urged David Cameron and George Osborne to drop their opposition to a European-wide tax on financial transactions, which is expected to be formally proposed by France and Germany at the G20 summit of world leaders starting tomorrow.

“The demands of the protesters have been vague. Many people are frustrated beyond measure at what they see as the disastrous effects of global capitalism; but it isn’t easy to say what we should do differently. It is time we tried to be more specific,” Dr Williams said.

On that last point I would say that perhaps we need, not more specifics within the context of the old discussion (a discussion which hasn't done so well for us in the past 30 years), not, in other words, to simply refine the old structures of inequality and unequal distribution, but to consider new styles of architecture, a change of heart. St. Paul's, as the guest (I'm still not certain of his name) said on BBC last night, is a structure designed to make you feel totally insignificant in the presence of God. At the same time, it's a building built by people with money, as an expression of their power. I doubt the building humbled them as much as it confirmed their exalted status and sense of their own self-worth (after all, to be able to command such a thing into being! It's almost a god-like power....). Maybe we need, Dr. Rowan, to consider the words of Mary when she heard her cousin's greeting; maybe we need to revive the concept of the Jubilee from the Law of Moses; or maybe we just need to dust off the savagely rejected and frequently savaged concepts of the liberation theologians. Maybe, in other words, we need to shift the discussion away from the awesome power of human society and how it is justly distributed, and towards a discussion simply about justice. At least for starters.

Or maybe it's just time to be a little more in the world, but a great deal less of the world:

First, the story. When the camp was originally pitched, over a fortnight ago, concerns were expressed about apparently critical issues of health and safety for staff and visitors to St Paul’s. The cathedral was precipitately closed for the first time since the Second World War. Mistake number one. When the health and safety report arrived after the first weekend, the Dean realised the issues were trivial and easily remedied with co-operative protesters.

Why the knee-jerk reaction? There was no one around the chapter table, other than the estimable Canon Giles Fraser, who would shortly fall on his sword, warning of the liabilities of embarking on particular policies. This would never happen in any other commercial or institutional organisation. So, mistake number two.

Mistake number three was down to naivety rather than indolence: St Paul’s allowed the City of London Corporation to call the shots. It moved into the common consciousness that to talk to the protesters would be to compromise the cathedral’s position. There was an unaired alternative view and it is this: no, it wouldn’t. The evidence for that is clear. Since those early days, the Church’s senior command has spoken regularly and publicly with the protesters, to productive effect.

The Rev. Pitcher lends a great deal of insight to this matter, but that is the internal affairs of the Church of England, and not being of that body, I leave the matter to them without further comment. I'm interested in the larger issue of the church in society, which this story points to. We have no equivalent to St. Paul's Cathedral in Jeffersonian America, nothing remotely approaching the Church of England in our history (the Pilgrims came here as castaways from that Church, if that tells you anything). In America, we get this:

Clergy emphasize they are participants in the aggressively leaderless movement, not people trying to co-opt it. Plus, in a movement that purports to represent the "99 percent" in society, the prominent religious groups are overwhelmingly liberal.

Religion might not fit into the movement seamlessly, but activist Dan Sieradski, who's helped organize Jewish services and events at Occupy Wall Street, said it must fit somewhere.

"We're a country full of religious people," he said. "Faith communities do need to be present and need to be welcomed in order for this to be an all-encompassing movement that embraces all sectors of society."

She said some protesters are wary because they don't recognize the authority of institutions, including religious ones, and are generally looking for clergy to be "ministering but not proselytizing." She recalled a conversation with an Occupy Santa Cruz protester while a man in a clerical collar picked up trash.

"(The protester) said, 'That dude's here with us. He's not handing out pamphlets and trying to save me. He's picking up trash,'" Drescher said.

Mark Tooley of the Institute on Religion and Democracy, an advocacy group for conservative mainline Protestants, said while Occupy Wall Street has succeeded in getting attention, it's limited because it's only attracting religious support from the left.

A call for government redistribution of wealth and reliance on street activism doesn't appeal to the swath of suburban churchgoers with conservative political and religious leanings, he said.

"It doesn't seem they put a lot of thought into expanding their support base beyond those who identify with 1960s-era protest action," he said.

Think Progress points out that this is: "one aspect of the 99 Percent Movement that has yet to be acknowledged by the mainstream media’s narrative: the growing support the protests are receiving from various faith groups and leaders around the country." And when they do point it out, our media can't help but frame it in the "horse race" narrative of politics. I don't think our clergy can't talk like Anglican clergy can; I think it's that they aren't allowed to in the national discourse. I mean, clearly American clergy can speak about the Gospels and justice:

One-sixth of all the words Jesus spoke, and one-third of all the parables, are about the dangers of wealth and possessions. It is something that we hear from the prophets — particularly of the Old Testament, and of course that’s what Jesus was steeped in, those were his scriptures — that any culture, but certainly one that claims to be Godly, is to be judged on how well the most vulnerable are treated.

It’s more than about numbers, and it’s more than about disparity of income. It’s really about our sense of community. And indeed, do the wealthy have a responsibility to the larger community? Are we really going to live in an “every man, woman and child for themselves” world, or are we going to be a community in which the greater good, the common good, is also a value that we hold?

But that's Bishop Gene Robinson at Think Progress, not Gene Robinson being interviewed by NPR. It's funny that people like Bill Maher, who really don't know very much, are allowed to inveigh against the hypocrisy of an American culture that claims to be godly; but American clergy can't get enough attention to point out what a "godly culture" should actually look like. Think Progress provides a host of links to stories about churches and clergy supporting the Occupy movement. Have you heard about it aside from stumbling across it on the Web? At least in England there is a public discussion going on about the responsibilities of the community to its members, to the least as well as the most powerful. At least in England, there are public resignations and public recantations of positions, and public reviews of attitudes, and religious leaders who take a “proper interest in the ethics of the financial world”. Judging by that NPR report, I suspect the "conservative" religious leaders in America would find such in interest an improper interference with "The Market." American religious leaders who do take such an interest are pretty much ignored.

The British are not a terribly religious people, and they aren't especially known for the spirituality of their culture. But it is clear that while they are so much like us in so many ways, good and bad, and while we are linked with them in our devotion to the "Anglo-Saxon" capitalism that the French and the European nations either deride or veer away from, our British cousins still have a thing or two to teach us about valuing people and examining our society and the ends we, as members of it, ought to pursue. I'm trying to imagine a secular entity in America which would be compelled to act because of the decisions of a major church building in America; and I just can't do it.