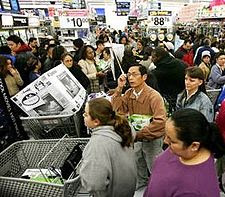 The unofficial slogan of Black Friday. Why? Because:

A woman trying to improve her chance to buy cheap electronics at a Walmart in a wealthy suburb spewed pepper spray on a crowd of shoppers and 20 people suffered minor injuries, police said Friday.

The attack took place about 10:20 p.m. Thursday shortly after doors opened for the sale at the Walmart in Porter Ranch in the San Fernando Valley.

The store had brought out a crate of discounted Xbox video game players, and a crowd had formed to wait for the unwrapping, when the woman began spraying people "in order to get an advantage," police Sgt. Jose Valle said.

I live across the freeway from a "wealthty suburb." People from "that side" come over to the grocery store I shop at. I'm not surprised this happened where it did, and I imagine the person with the pepper spray made her getaway in a very expensive car. Whether she could still afford it or not, I can't say; but I'm guessing she lived nearby.

I understand at least one person was shot in the parking lot of another Wal-Mart, presumably a robbery attempt. Robberies I almost understand; at least they seem normal next to a customer taking out the competition with chemical weapons.

In Little Rock, Arkansas, close to the home of Wal-Mart, a riot over $2 waffle irons prompted Gawker to write that incident represented everything "awesome" about America, including the: "horrible economy, aggressive consumerism, mindless violence and a complete lack of concern for one's fellow human beings."

Jeremiah springs to mind in response to a day like this: "Oh that my head were waters, and mine eyes a fountain of tears, that I might weep day and night for the slain of the daughter of my people!" Or Isaiah; surely the people are grass. But those are both too big, too sweeping, too grand for this occasion. The prophets were responding to events of life and death, of exile and loss; this is just the death of spirit. This seems more like Jesus chasing the money changers out of the temple; except Wal-Mart is no temple, and neither are the cities of America.

I was prompted to think, today, about what religions teach, and two fundamental teachings came to mind: that if there is a meaning to life, it is to enjoy life, although how it is enjoyed is the teachings of that religion. The other is to care for your neighbor, your fellow man. Neither is on display here, although ostensibly the reason for the purchases and the midnight sales is a religious one.

Well, not really; never has been. But can we at least get Thanksgiving back?