Open your window and shout.... 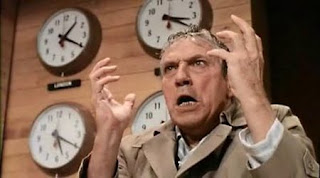 The question is, does anybody know that?

You deplore the demonstrations taking place in Birmingham. But your statement, I am sorry to say, fails to express a similar concern for the conditions that brought about the demonstrations. I am sure that none of you would want to rest content with the superficial kind of social analysis that deals merely with effects and does not grapple with underlying causes. It is unfortunate that demonstrations are taking place in Birmingham, but it is even more unfortunate that the city's white power structure left the Negro community with no alternative.

In any nonviolent campaign there are four basic steps: collection of the facts to determine whether injustices exist; negotiation; self-purification; and direct action. We have gone through all of these steps in Birmingham. There can be no gainsaying the fact that racial injustice engulfs this community. Birmingham is probably the most thoroughly segregated city in the United States. Its ugly record of brutality is widely known. Negroes have experienced grossly unjust treatment in the courts. There have been more unsolved bombings of Negro homes and churches in Birmingham than in any other city in the nation. These are the hard, brutal facts of the case. On the basis of these conditions, Negro leaders sought to negotiate with the city fathers. But the latter consistently refused to engage in good-faith negotiation.

Then, last September, came the opportunity to talk with leaders of Birmingham's economic community. In the course of the negotiations, certain promises were made by the merchants–for example, to remove the stores' humiliating racial signs.On the basis of these promises, the Reverend Fred Shuttlesworth and the leaders of the Alabama Christian Movement for Human Rights agreed to a moratorium on all demonstrations. As the weeks and months went by, we realized that we were the victims of a broken promise. A few signs, briefly removed, returned; the others remained.

As in so many past experiences, our hopes had been blasted, and the shadow of deep disappointment settled upon us. We had no alternative except to prepare for direct action, whereby we would present our very bodies as a means of laying our case before the conscience of the local and the national community. Mindful of the difficulties involved, we decided to undertake a process of self-purification. We began a series of workshops on nonviolence, and we repeatedly asked ourselves: "Are you able to accept blows without retaliating?" "Are you able to endure the ordeal of jail?" We decided to schedule our direct-action program for the Easter season, realizing that except for Christmas, this is the main shopping period of the year. Knowing that a strong economic-withdrawal program would be the by-product of direct action, we felt that this would be the best time to bring pressure to bear on the merchants for the needed change.

Then it occurred to us that Birmingham's mayoralty election was coming up in March, and we speedily decided to postpone action until after election day. When we discovered that the Commissioner of Police Safety, Eugene "Bull" Connor, had piled up enough votes to be in the run-off, we decided again to postpone action until the day after the run-off so that the demonstrations could not be used to cloud the issues. Like many others, we waited to see Mr. Connor defeated, and to this end we endured postponement after postponement. Having aided in this community need, we felt that our direct-action program could be delayed no longer.

You may well ask: "Why direct action? Why sit-ins, marches and so forth? Isn't negotiation a better path?" You are quite right in calling for negotiation. Indeed, this is the very purpose of direct action. Nonviolent direct action seeks to create such a crisis and foster such a tension that a community which has constantly refused to negotiate is forced to confront the issue. It seeks to so dramatize the issue that it can no longer be ignored. My citing the creation of tension as part of the work of the nonviolent-resister may sound rather shocking. But I must confess that I am not afraid of the word "tension." I have earnestly opposed violent tension, but there is a type of constructive, nonviolent tension which is necessary for growth. Just as Socrates felt that it was necessary to create a tension in the mind so that individuals could rise from the bondage of myths and half-truths to the unfettered realm of creative analysis and objective appraisal, so must we see the need for nonviolent gadflies to create the kind of tension in society that will help men rise from the dark depths of prejudice and racism to the majestic heights of understanding and brotherhood.

The purpose of our direct-action program is to create a situation so crisis-packed that it will inevitably open the door to negotiation. I therefore concur with you in your call for negotiation. Too long has our beloved Southland been bogged down in a tragic effort to live in monologue rather than dialogue.

The Rev. Dr. King, yet again. It isn't simple, yet it is important. The idea of protests is either to disrupt; or it is to create "a type of constructive, nonviolent tension which is necessary for growth." The latter, obviously, is more productive. The former, though, seems to have become the goal of the Occupy movement.

So, the choice is create a situation that opens the door to negotiation, or march, annoy people, and get arrested; alot. Which will just annoy people; alot. Martin Luther King started in December, 1955 with a bus boycott that lasted 382 days. It was 1964 before the Civil Rights Act was passed, 1965 before the Voting Rights Act was passed, and when King died he was leading marches for economic justice. But re-read the "Letter from Birmingham Jail," and you'll see King's focus never really shifted in 13 years of leading the movement. 13 years. And the Occupy movement expects to change things because they are pissed off at a few mayors and a federal government that is willing to help the mayors do what governments do: maintain public order?

I'm starting to lose interest in what the children are doing. David Graeber seems to think an anarchist vision that closely resembles a pure democracy will win the day. More and more I am not so sure. I don't seek a unifying vision so much as I seek a rational purpose. Disruption is not a purpose; it's a temper tantrum.

If there is no more purpose to the Occupy movement than that, then Charles Pierce is right, and this is the way the movement ends. Not with a bang, but with a shout: "I'm mad as hell, and I'm not gonna take it anymore!"

And we all know how far that movement went.