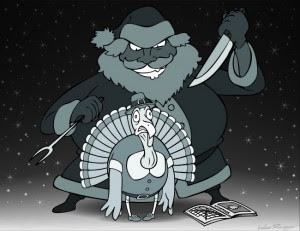 "Look, Charlie, let's face it. We all know that Christmas is a big commercial racket. It's run by a big eastern syndicate, you know."

Kelly Groehler, a BestBuy spokeswoman, noted that CEO Brian Dunn, once a store employee himself, "fully appreciates" the feelings of Melaragni and others, adding that Dunn will miss much of the holiday himself as he helps stores in Minnesota gear up for Black Friday. In a statement on the matter, the company said, "This year, customers have told us -- and our competitors -- that they plan to shop on Thanksgiving Day, and earlier than ever on Black Friday. We therefore made the difficult decision to move our opening Black Friday to midnight. We know this decision changes Thanksgiving plans for some of our employees, and we empathize with those who are affected."

Frankly, I'm surprised we aren't hearing arguments about how opening at midnight on "Black Friday" will create jobs, or how eliminating holidays and weekends will "create jobs."

Apparently the stores could open at noon on Thanksgiving and people would still be lined up from closing time on Wednesday night. This phenomenon seems only to apply to malls and "big box" stores, though. I worked retail for years, and "Black Friday" at the small store I clerked for was always a quiet day. It seems everyone took family to the mall on Friday, to get them out of the house (thus do we entertain ourselves in America). Our regular customers came by on Saturday, or in December. But I've seen the earnest faces of people jamming stores to get "bargains" the moment the stores resumes sales after the Thanksgiving turkey is devoured, people who don't seem to have an extended family they want to get out of the house. I really don't understand it.

Why this isn't all seen as a War on Christmas, or even a War on Thanksgiving*, is beyond me. Best I can figure, we need to put the "Christ" back in Xmas because it's better marketing for everybody. The slogan alone is still good for billboards and bumper stickers, and those things don't grow on trees.

And yes, this year Christmas seemed to obliterate Thanksgiving entirely (the decorations are already up, the carols are already caroming from the speakers in the stores; that's been true for a week now. I even passed a house yesterday already festooned with Christmas lights and yard figurines and fake Xmas trees), and Hallowe'en became the new unofficial gateway to Xmas excess. Thanksgiving vanished in the rush to sleigh bells and fake snow and ceramic "villages." Do we really love Xmas this much? Or are the stores just desperate to balance their books before New Year's?

Since Christmas Day falls on a Sunday this year, I'm every curious to see what the most heavily marketed churches will do about Sunday being a "family holiday." If the past is any guide....


*which apparently has been going on for years. I had no idea.