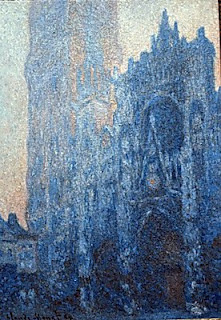 Without art, without religion, without love and without intellectual pursuits life would not be worth living. It would be the life of ants: busy,busy,busy but with no purpose outside survival of the group. Art is an expression of human life. It flourishes when life flourishes. It is always the personal and emotional projections of an individual.--Dominique de Menil

Working my way backwards from the last post toward what was originally the starting point (i.e., something hopefully substantive), I got this from this at Crooked Timber (the latter should be familiar, and likely will become more so before long), and the first thing they both made me think of was not the proud American tradition of know-nothingism, but the modern American concept of spirituality (which began with Whitman and Dickinson and Ralph Waldo, and their spiritual granddaddy Thomas Jefferson, so "modern" is an elastic term here) the Rothko Chapel. Which I've never seen as clearly illuminated as that picture on the home page, but then again the pictures aren't as monochrome as that, either. The less famous chapel, but the more moving one for my money, is the Byzantine Fresco Chapel nearby. It doesn't look like much from the outside, but then again, the original chapel isn't too awe-inspiring, either. And that raises the question de Botton is trying to address: what inspires awe, and why?

Is art alone inspirational? Or is it what the art represents? Does an icon mean the same to me as to someone raised in the Orthodox traditions? Undoubtedly not. But if I understand that icons are meant to represent the transcendent world, then I begin to find new meaning in them, and meditating (or just sitting in silence) in the Byzantine Fresco chapel can be more meaningful to me than the interior of Koln Cathedral (which I have visited), or Westminster Abbey (about which I only remember Eliot's stone and the inscription on it). Can we separate meaning from function, and allow function to create meaning for us?

I don't think so.

I've been in the oldest church in Europe. Or if not the oldest, one of the oldest; and "old" in the sense that it's been in continuous use as a place of worship for centuries. It was a tiny chapel in Brugges, Belgium. Again, I barely remember it (it was almost 40 years ago, now, that I was there). It was inspiring because it was so old, because it was still a sacred space, and because it resonated with my sense of spirituality. It was, in the old Celtic sense, one of the "thin places." Just from the activities I knew had been conducted there for centuries, I felt the "clouds of witness" around me. But if you don't believe in "thin places," if you reject the idea of transcendence as a metaphysical concept (and what else can it be if not metaphysical? If you are positivistic enough to reject all concepts that are not tied to material strata, then even love and hate are simply products of biochemistry and neural pathways, which is a cold cup of tea in the face, indeed.), then it's just an old building, or an impressive architectural and engineering feat. Whatever impression the Chapel of Humanity made on Maria at Crooked Timber was clearly tied up with her knowledge of the life and thought of Comte, more than it was the mere fact of the space she was in.

Space is space, after all; until you make something else out of it. And no, I'm not sure it's "always the personal and emotional projections of an individual." It's something more transcendent than that; for art and for religion. But that's yet another post.....