The poor will always be with you because it's cultural 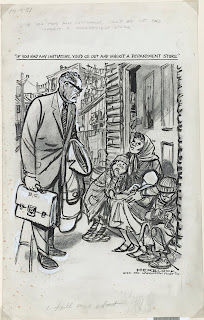 "When it shall be said in any country in the world, my poor are happy; neither ignorance nor distress is to be found among them; my jails are empty of prisoners, my streets of beggars; the aged are not in want, the taxes are not oppressive; the rational world is my friend, because I am the friend of its happiness: when these things can be said, then may that country boast its constitution and its government."--Thomas Paine

Atrios directs me to this:

The growing divide between rich and poor white Americans is studied in a new book called Coming Apart by Charles Murray.

The breakdown is less about income inequality and has more to do with two drastically different cultures that both call themselves American.

Which includes a link labeled: "Click here to see how white America is coming apart."

Which begins a series of charts, led off by the caption:

The rest of the charts are about economic factors dividing "white" America. Or, rather, a correlation can easily be drawn between economic status and the charts on marriage, divorce, church attendance (yes, that's related to income; and no, this really isn't news), As Charles Pierce pointed out today, David Brooks has already picked up on this. And yes, this is the same Charles Murray who decided science could prove that blacks were intellectually inferior to whites. So it's no surprise Mr. Murray, et al., are concerned with income inequality in white America.

Since income inequality in "black" America (can we really imagine such a thing?) is clearly the fault of the blacks. Just ask Newt Gingrich. But in white America? Why, it's not income inequality; it's cultural.

Because, you know, it isn't racist if you're a white man saying it about white people.

Now show some initiative and inherit a department store, you lazy good-for-nothings!