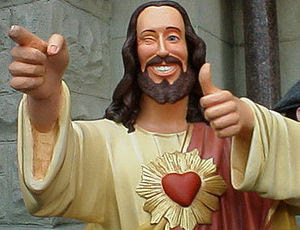 Sen. Orrin Hatch (R-Utah) said he wants to remind President Obama that he is not Jesus Christ.

"Someone needs to remind the president that there was only one person who walked on water and he did not occupy the Oval Office," Hatch said in a floor speech. "With due respect to the president, he ought to stick to public policy. I think most Americans would agree that the gospels are concerned with weightier matters than effective tax rates.”

Hatch's comments came after President Obama used a National Prayer Breakfast speech to suggest that higher income tax rates for the rich "coincides with Jesus’s teaching that ‘for unto whom much is given, much shall be required.’”

I am reminded of a comment made to me during my active ministry, that when the spirit of God starts moving among a group of people, the Devil gets busy.

Not that Obama was prophesying at the prayer breakfast, nor that Orrin Hatch is motivated by the Father of Lies. But the pattern is familiar to any pastor: prick the audience's conscience, and their response is to attack you for acting holier than them.

And no, I don't think Obama's tone was "holier than thou." Interesting some took it that way, though, isn't it?

In other news, righteous public Christian Rick Santorum rewrites the gospels so that whatever you did for the corporations, you did for God and the greater good:

GOP contender Rick Santorum had a heated exchange with a mother and her sick young son Wednesday, arguing that drug companies were entitled to charge whatever the market demanded for life-saving therapies.[...]

“People have no problem paying $900 for an iPad,” Santorum said, “but paying $900 for a drug they have a problem with — it keeps you alive. Why? Because you’ve been conditioned to think health care is something you can get without having to pay for it.”

The mother said the boy was on the drug Abilify, used to treat schizophrenia, and that, on paper, its costs would exceed $1 million each year.

Santorum said drugs take years to develop and cost millions of dollars to produce, and manufacturers need to turn a profit or they would stop developing new drugs.

And in case Santorum's sympathies are unclear:

"Look, I want your son and everybody to have the opportunity to stay alive on much-needed drugs," Santorum responded to the woman, CBS News reported. "But the bottom line is, we have to give companies the incentive to make those drugs. And if they don't have the incentive to make those drugs, your son won't be alive and lots of other people in this country won't be alive."

It's money that matters. Because, you know, better you should die than increase the burden on society of the surplus population:

"What happens to the cost of health insurance," Santorum said, CNN reported. "There's a reason for preexisting conditions clauses. You want people to get insurance, and if they don't, then they shouldn't be free riding on everybody else. That's exactly what's going to happen with Obamacare."