Of doughnuts and holes..... 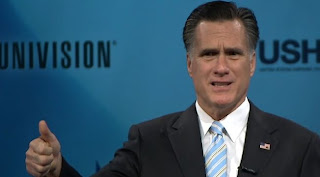 Josh Marshall says everyone wants Mitt Romney to leave the national stage yesterday; except for Democrats happy to have him to kick around a bit more as representative of the GOP.  TPM bolsters that opinion with two articles:  one quotes David Frum, Ana Navarro, Matt Lewis, and Bobby Jindal, all disapproving of Romney's comments about the "gifts" Obama gave voters who voted for him.   The other points out Kelly Ayotte isn't happy with Romney, either.

Think Progress concurs, quoting Jindal and Scott Walker, and headlining the article that "Republican Governors Condemn Romney's Claim...."  Which sounds like all the GOP Governors stood foursquare with Jindal and Walker and Sen. Ayotte and some pundits.

According to Wade Goodwin on NPR, the GOP governors (at the same meeting TP is talking about) are very happy with where they are.  And he starts the report quoting Bobby Jindal; who really is just delivering good ol' Southern Louisiana populism, not a radical shift in GOP direction.  Listen to the quotes there; there isn't any despair over what Romney did; it's more over what Obama did.  Romney's remarks may not be very smooth, but the GOP idea that we are divided between "movers" and "takers" is still "widely accepted" among the GOP governors.

This is, of course, good news; just not necessarily for Republicans.

Meanwhile, watch the doughnut, not the hole.