Meanwhile, in the agora.... 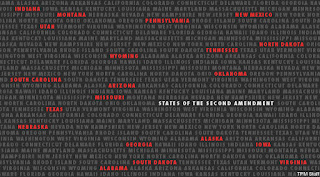 Growing up around guns and owning them as an adult affords a person memories and experiences that strangers to guns may have trouble understanding. The divide is phenomenological, not political (or not political until it gets to be), like the gulf between those who’ve had sex and those who haven’t or those who smoke and those who’ve never lit up. Pulling a trigger and being prepared to do so cuts patterns in the self. Depending on the nature of your social life, which time around guns can shape and color in ways that I’ll describe, you might forget that these patterns are even there, because you’re surrounded by people who share them—until someone or some event challenges you to answer for your thinking.

That's from an article Josh Marshall highlights at TPM, where he's trying to make much of the distinction between those who live in a "gun culture," and those who don't.  I rise to call "bollocks" on the whole discussion.

Replace "guns" in that quote with anything you like:  "Evangelicals;" "Bible-thumpers" or "holy rollers" would do, as well.  "Snake handlers" comes to mind, though I'm more familiar with the previous categories.  Maybe "Ultra-orthodox Jews," or "Fundamentalist Muslims."  You get the idea.  Drop in the term of your choice for the exclusionary group of your choice, and then tell me what's different about guns and gun owners.  JMM notes he's had correspondence with people fanatical about the "liberty" they think the 2nd Amendment represents, even though they don't own guns, and with gun owners who think all guns should be registered and very heavily regulated, so it's not a simple either/or equation, even as we try to make it one for easier discussion. But really, do we have to talk about "tribes"?

Part of the reason I object is the quasi-anthropological aspect of the topic.  "Tribes" is a term with specific meaning in anthropology, but a vaguer, looser meaning in the general public.  We can speak of "tribes" with in political parties, or even within national regions (or even local ones).  But when we speak of "tribes" in this context, it carries the idea that we must give due deference to that tribe's concerns.  And yet we don't have to acknowledge the "legitimate concerns" of the "gun tribe," anymore than we have to give due deference to the "tribe" of drug gangs.

Ah, you will say, but gun owners are not criminals, and drug gangs are; the comparison is unfair and unjust.  But drug gangs are only criminal because we have declared their activities criminal; there's nothing inherently good or bad about drugs; it's the ones we define as bad which are the problem (alcohol v. marijuana, for example).  The real issue is not the inherent evil of the fetish object (drugs, guns), but the question of recognition of, and response to, the "tribe" we say surrounds that issue.  Do we really need to recognize the legitimate concerns of drug gangs the way we recognize the legitimate concerns of gun owners?

Let me put this in religious terms.  We have a 1st Amendment, which protects religion in this country.  Does that mean we have to respect the rights of religious fanatics to firebomb abortion clinics, or commit terrorist attacks, or just insist our children learn that evolution is false and comes from Satan?  Do we even discuss such extreme ideas in terms of the "tribe" such people grow up in, or join in adult life?  We have a 2nd Amendment which we think protects gun ownership in this country (it is, even under Heller, far less protected than religious belief).  Does that mean we have to respect the rights of people to amass arsenals that can be used by family members, if not the purchasers themselves, to commit mayhem?

If  you understand religious extremists (Muslim, Christian, what have you) as a "tribe," does it advance your understanding of how to respond to them?  Do I really need to understand fundamentalist Christians as  "tribe" in order to know I don't want them writing laws about who can marry whom, or what can be taught in schools?  I've grown up around both gun owners and religious fundamentalists, and it's never occurred to me to categorize either as a "tribe" whose "culture" I must understand.  I understand full well the culture of both, and each partakes of the general culture far more than either creates a unique, individual culture apart from the main.  They aren't tribes so much as they are special interest groups.  They also move back and forth between wanting to ignore and withdraw from the general culture, and wanting to dominate and control it.  The former is their business, but the latter is political, a matter for the polis, the people in general.  And I don't really need to consider them as anything else but wrong, to confront that.

The "divide" is not phenomenological, unless you mean it is basic to human identity and existence itself.  But that's nonsense; how can gun ownership be any more basic to human existence than religious belief, and yet we don't allow religious beliefs not shared by the majority to hold sway over our legislative process.   As for "patterns" which are "cut into the self" which you may not even know are there, I could make the very same argument about growing up in a small East Texas town in the '60's.  Annie Dillard even wrote a very insightful memoir about a '60's suburban American childhood.  You could use the language of that quote to describe the weltanschaung she described from that experience, or to describe mine; and I've never considered such experiences to be "phenomenological" or like a gulf between the sexually experienced and the sexually inexperienced (which is a pretty silly gulf, looked back at from 40 years past the onset of puberty).  Are Ms. Dillard and I part of a "tribe" because our childhoods look familiar on "Mad Men"?  Hardly.  And as for events that have challenged my thinking, well:  if that hasn't happened to you by now, you haven't been paying attention.  That, or you haven't been out in the world yet.  Maybe it's time you joined the polis in the agora.

Molly Ivins once wrote that she liked the guys who ate lunch in the Petroleum Club, but she didn't want them running the country.  I feel the same way about the "gun tribe."  I have nothing against them, personally; but I'm not too concerned with the source of their fanaticism, or with the need to find a common language with them, any more than I want to reason with fundamentalists about teaching evolution schools, or with rabid anti-Communists about the fluoride in the public water supply.  Such fanatics are no less tribalistic than rabid defenders of what they think is the 2nd Amendment.  I don't have to understand and appreciate their position, to know I don't want them making laws.

This is, I suppose, "tribal" thinking:

“Martin Luther King Jr. said, ‘Injustice anywhere is a threat to justice everywhere’ — we are not going to stand for this injustice,” [Oklahoma state Sen. Nathan] Dahm [(R)] told the receptive crowd. “Another quote that he said was, ‘Nothing in all the world is more dangerous than sincere ignorance and conscientious stupidity.’ Now, I’m willing to give the President the benefit of the doubt, and believe that this is just sincere ignorance and not conscientious stupidity. But I’m here to say, no matter what it is, we in Oklahoma will not stand for it. The Second Amendment reigns supreme. ‘Shall not infringe’ means ‘shall not infringe.’”

The Second Amendment "reigns supreme"?  Supreme over what?  The entire Constitution?  You can call this kind of reasoning "tribal," but it is also supremely stupid.  One might as well say there is a "tribe" that supports the cause of nullification.  They don't deserve my respect or consideration, either.

As far as I'm concerned, this is the best and final word on the subject:

"We stop being the world's greatest country when we allow our most vulnerable citizens to be slaughtered because we might offend people by taking away their guns."

Indeed, at that point it is safe to say we stop being a country at all.