Ted Poe may actually be stupider than Louie Gohmert 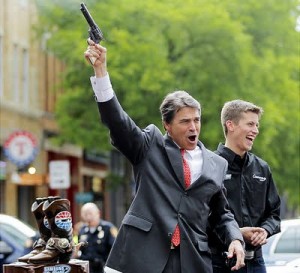 I was teaching a class and we got off on the topic of school shootings.  A student offered that he'd just gotten an e-mail about a shooting at North Harris college, but he doubted it would so much as make the evening news.

Then I got in my car, and it was the first story on NPR.  O boy.

The details were very obscure yesterday, and they're still obscure today.  The cause of the shooting was an "altercation," that much seems clear.  As the Chancellor of the Lone Star College system would later report, it was "not an active shooter scenario" (and is that phrase now going to enter our discourse?).  But three people were wounded, one a school employee.  That led to the assumption there were two guns involved, and each shooter shot the other; but that may not be true. A local news report on a press conference about the shooting left the impression there was only one gun involved.  Only one person has been charged with aggravated assault as of this morning.  And while no one else is speculating on it, expect him to claim he was "standing his ground" and so the shooting was justified.  Except, of course, he shot somebody he wasn't being threatened by; which may keep that particular defense from being any use to him.  We'll see.

As for the shooting itself, it produced panic:

Mobley and other students ran from the scene.

“As soon as I heard the bullets flying and the gun being fired off, then everyone started running and it was a hint for me to start running as well," Mobley said.


The NYTimes had a similar report:


Students said they did not realize that the shots were actually gunfire. Because the shooting occurred outdoors — in a center courtyard near the library and academic buildings, officials said — many heard the sounds. One student sitting at a table on the third floor of the library thought it was a book cart toppling.

“Later we heard people screaming, and we knew it was gunshots,” said the student, Jonathan Moreno, 19, a freshman.

Mr. Moreno hid with other students in a back room on the third floor of the library in the moments after the shooting. “It was a scary thing,” he said. “Some people were panicking. Some lady was about to have like an asthma attack. There were some people crying.”

Other students sat or crouched in classrooms in buildings with the lights turned off. Some fled classrooms and buildings so quickly that they left their belongings behind and planned on returning late Tuesday night to retrieve them.


And yet another student had exactly the right response:

"I heard some guys arguing. I heard one guy shouted, 'Dude, I'm not fixing to play with you.' So I turned around because I thought somebody was about to fight, and when I looked, I seen a guy, he had his back to me. He pulled out a gun and he started firing the gun. I heard about two or three shots, but some people said they heard more. But as soon as I seen the gun, like as soon as the first shot went off, I had already turned around and ran up the stairs."


But the response of the US Representative (Ted Poe, Guns Over People)  for that area?

POE: It brings to focus the fact that many schools and universities and students have — are defenseless at the schools and places of higher education and this seems to show that.

I've yet to read of the students who wanted to run toward the shooting.  Indeed, local news indicates the campus had just completed training sessions on what to do in case of a shooting incident, and the faculty and staff did just what they were supposed to do:  kept the students in classrooms until the campus was secured, then told the students to leave the campus.  I suppose it would have been better if every student on campus had decided they were "heroes" and knew who the original shooters were, huh?

Besides, which guy was the "bad guy" here?  If you ran up on them, who would you shoot first?  And if they both had guns, why didn't their guns magically shield them from harm?  Wasn't the "good guy" protected by virtue of carrying a gun?  Or were they both guilty because they violated Texas law by carrying a gun on a college campus?  And what about the custodian who was shot because he was nearby?  Would he have been defended against bullets if he'd had a gun on his hip?

All I can say in Ted Poe's defense is that it took a major effort to even verify he sits in the US House.  The only reference to him regarding this incident took me back to Think Progress, where I found his comments in the first place.  Otherwise, he hasn't made any news that separates him from somebody with the same name who went on "American Idol" about a year ago.  So he's pretty much a non-entity.

Then again, it's a representative government, as Molly Ivins used to remind us, so maybe he's doing what the people who elected him want him to do.


Is this the place to note some in the Texas Lege want to reduce the "training" time to get a concealed handgun license from 10 hours to 4?

And does Texas law allow guns on college campuses?  Actually the law, for the moment, is quite clear:

And by the way, what absolutist-hating Constitution destroying American institution defending freedom do you think said this?


No points for peeking.

I have to add two things about this story:

Richard Carpenter, chancellor of the Lone Star College System, said the campus is a gun-free zone that "has been safe for 40 years."

And the time it isn't safe, some idiot brings a gun on campus in violation of state law and for no good reason.  Because the argument between the shooter and his victim was, according to the sheriff: "idiocy, stupidity."  All it needed was a gun to elevate it to the national news.  Not that any of these facts are getting in the say of the geniuses of the Texas Legislature:

"It affirms what we know is true: When you disarm law-abiding citizens that we ought to trust, we make them defenseless," Birdwell said.
....

"It levels the playing field," in terms of safety, said Sen. Donna Campbell, R-New Braunfels. "We have to allow people the option for self-protection."

No one wants to mention the shooter was probably a law abiding citizen himself, until he brought this gun on campus and then pulled it out and started shooting.  And clearly what this situation needed, where three people were shot, one of them a bystander, was even more people spraying bullets in all directions.  You know, when someone pulls a gun, you need to level the playing field by arming everyone in the vicinity, and let the bullets sort it out.