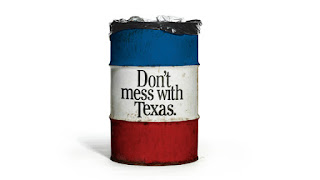 Greg Abbott needs to put a sock in it:

[Texas] Attorney General Greg Abbott Wednesday launched a Google web ad campaign inviting New Yorkers who feel their gun rights are threatened by a new law just signed by Gov. Andrew Cuomo, to move to Texas where they will have the right to bear arms, and, with lower taxes, more money to buy ammo.

Yes, come to Texas!  But don't make too much noise, or your neighbors will feel empowered by our "Castle Doctrine" law to come over and shoot you!  But it's okay!  If he's stupid enough to shoot you AND videotape the event, we'll put him in jail!*  Otherwise, you'd better keep the music down, okay?

And we have low taxes because we don't pay for public education anymore!  So come for the lax gun laws, stay for the undereducated populace!  Maybe you'll get to shoot a teacher!  But again, just don't videotape it....


*And yes, if you're dead from the shooting, a 40 year jail sentence is weak recompense for empowering stupid people to claim your music is physically threatening them, but that's the price we pay for freedom in Texas!  Well, the victims pay the price; the shooters probably get away with it, even if they do it shooting people in their front yard in full view of a cop.  Like I said, as long as you don't videotape it, you're good!  Welcome to Texas, Yankees!