Meanwhile, back in the stacks.... 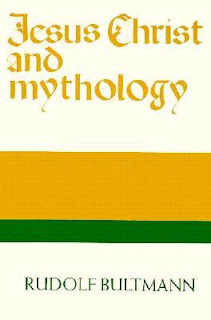 Lent unofficially begins next Wednesday (I take as my authority Thomas Merton).  I have often posted on Ash Wednesday , and I may do so this year.  But I've decided to do something different; and it may not necessarily work.

I want to do a book study (or book club, if anyone participates) on Rudolf Bultmann's Jesus Christ and Mythology.  I started re-reading it recently, and was surprised at how much I agreed with it, and even where I disagreed with it, the conversation between me and the book was inspiring.  My first encounter with Bultmann was actually in college, through the good offices of Francis Schaeffer, who did his best to convince me Bultmann was a source of theological error in the world.  I found out later what a fundamentalist Schaeffer was; but his approach was so familiar to me, so similar to the hermeneutic of William Barclay, the only source of scriptural studies I knew (I think every Protestant church in America had a "church library" with a copy of Barclay's works on all the books of the Bible), that I took Schaeffer as a legitimate source, even as I didn't quite reject Bultmann out of hand as he did.

I finally read Bultmann, without such blinders, in seminary.  I read his seminal work on the Gospel of John, and his work on the synoptics (he favored John, so the synoptics were slighted, IMHO.  I still prefer Luke over the others, but that's me.).  I got my copy of Jesus Christ and Mythology sometime in seminary, but I recognized it as the less scholarly effort than his magnum opus, and I never took it very seriously.  I also knew, from some experience by then, that Biblical scholars did not make the best theologians, and JCM is a stab at theology, not a simplified version of Bultmann's scriptural studies.

Picking it up again recently, though, I realized I had done it a disservice.  It is not a truly challenging little book, like The Gospel of John, but it is a much more approachable book.  Bultmann comes out of that long line of German scholarship, where knowledge is a substantial thing and a deep well, and fluency in several languages as well as having a library of articles and books at one's fingertips (some of the pages of the Johannine study are taken over by the footnotes, and each footnote has practically its own bibliography) are common coin.  This doesn't appear on the surface of  JCM like it does in Gospel,  but as he warms to his subject Bultmann drops the facade of Herr Doktor Professor and exposes himself as a confessing Christian.  It is not a picture I'd have gotten from Schaeffer's criticisms, and it is clearly this book that outraged Schaeffer the most (I'm not sure he was capable of critiquing Bultmann's scriptural work on its own terms.  I'm not sure anybody is, however.)  Let me say The Gospel of John is a mountain range; you practically need guides and special equipment to approach it.   JCM is a pleasant hike in the foothills.  You can spend a few pleasant afternoons with it.

Whether that experience can be found in a blog reading of the book is what I hope to find out.....