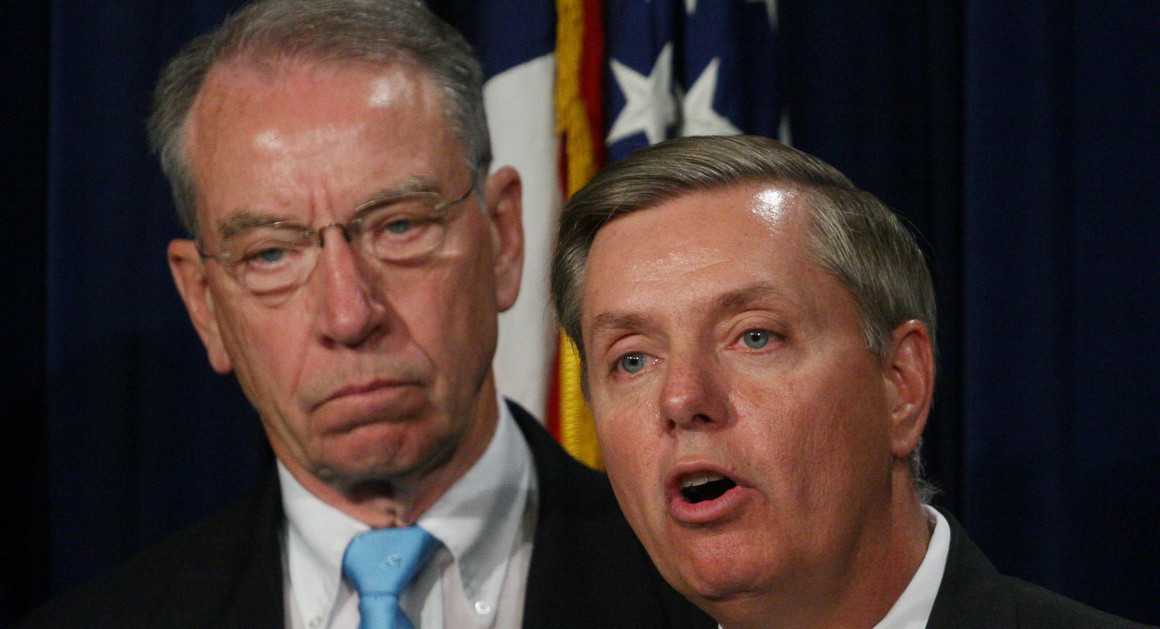 Pardon me while I suspect somebody is trolling Donald Trump.

Vox and TPM and Slate and NPR all note that "key senators" are turning against Sessions and suggesting Trump ready a new candidate for A.G. to be installed in late November.  But John Cornyn and Ben Sasse have publicly declared that a bad idea.

But the narrative is that Sessions has lost the Senate, and so it's a done deal.  And that's the funny part:  it's the narrative that matters, not the reality.  If Trump fires Sessions, where are the 51 Senators who will approve a new A.G.?  Especially one who will immediately fire Mueller and Rosenstein and half the DOJ and all the FBI and open up all those investigations of Hillary that Trump is demanding?

Or are Graham and Grassley hoping Trump fires Sessions and that leaves Rosenstein in charge?  And Trump is screwed even harder because he so clearly tried to stop Mueller?

“The pardons — I don’t agree with it,” said barber shop owner Aldo Sartorio, who said that the president pardoning Manafort could make him change his mind about backing him in 2020.

“The president better watch about the pardons,” concurred Aldo’s relative, Peter Sartorio. “With the pardons, if he does that, it looks like it was set up by him with the last couple of tweets that he had, where he sticks up for… Manafort, thinks he’s a great guy. He’s kind of sending a message that, ‘If you stick with me, I’ll pardon you.'”

Pardoning Manafort is not the gold-clad winner Trump might expect it to be, and not just on the political front.  If Trump pardons Manafort, Mueller can still compel Manafort to testify. The idea of a non-pardoned witness is that prosecution tends to focus the mind, and immunity is what keeps the 5th Amendment away. But someone with a pardon can't use the 5th Amendment. They can be subpoenaed and threatened with perjury or obstruction of justice if they lie or dissemble, as well as contempt if they simply refuse.

A pardon is not a Get Out Of Jail Free In Perpetuity card.  It's not a Get out of Jail Free card at all. It can't be held for whatever the future brings.  It can only be retrospective, never prospective.  Besides,  Trump's pardon of Manafort could be a criminal act (obstruction, or other crimes). As Josh Marshall points out, Clinton was investigated for pardoning Marc Rich. The facts don't have to fit the Manafort case, the example is enough. The pardon power is essentially without limit, but it's use is not absolutely without consequence.

And if Manafort faces state criminal charges, there's nothing Trump can do for him then.  So a pardon reminds people of what Trump did, while Manafort remains in the news.  In fact, pardoning Manafort or even firing Sessions won't do much at all for Trump's fortunes, as again the indispensable Josh Marshall points out (pardon the length):

That has changed pretty dramatically. Mueller referred the Cohen matter to the Southern District of New York early on, recognizing that at least these issues were outside the scope of his inquiry. That has led into the Trump Organization itself, with the company’s decades-long CFO given immunity in the Cohen investigation. SDNY also gave immunity to the guy who runs The National Enquirer. With that, we find that the Enquirer appears to have run a sort of wide-ranging extortion operation in which it would bury damaging stories about Trump and other celebrities either for money or to ensure their cooperation on other fronts. Maybe they managed that without managing to run afoul of any laws. But I tend to doubt it.

That’s not all. The Public Integrity Section at Main Justice is undertaking a major investigation into Elliott Broidy, the big GOP fundraiser and until recently Deputy Finance Chair of the RNC. Broidy is being investigated for trying to sell access to the Trump White House and DOJ to interests in Malaysia and China. Broidy’s name should be familiar. Michael Cohen set up a hush agreement for him too. Broidy is also at the center of the Saudi/UAE part of the Russia scandal. He’s like the Kevin Bacon of Trump corruption, albeit much less dashing.

The point is this inquiry isn’t part of the Mueller investigation or the Manhattan US Attorney’s office. It’s out of Public Integrity – the main arm through which the DOJ deals with public corruption. Just this morning we learned that the Manhattan District Attorney (that’s state, not federal) is considering pursuing criminal charges against the Trump Organization tied to the misreporting of the Cohen hush money reimbursement. We can even go a bit further afield from Trump and his family to note that the case of Maria Butina, NRA favorite and accused Russian intelligence operative, is being handled out of the Counterintelligence Division, again separate from the Mueller probe. This doesn’t even get into what’s going on at the New York State Attorney General’s office.

The point I’m trying to make is that there’s no longer just one investigation. There’s not two. There are multiple, distinct investigations tied to President Trump and, critically, they are being run either by different jurisdictions or entirely different parts of the Justice Department. There are plenty of paths to the President’s and his family’s undoing even if he manages, through whatever means, to decapitate the Special Counsel Investigation.


Firing Sessions to get to Mueller won't stop the investigations, and probably won't win hearts and minds, either.  And if he fires Sessions and can't replace him easily, that story lives in the headlines for weeks and weeks and weeks and weeks.   Are Graham and Grassley really that ignorant of these facts?