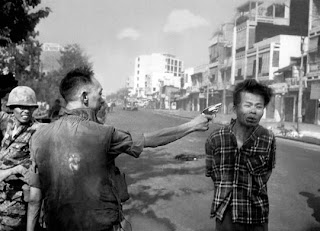 The famous image from Vietnam that "helped change American opinion of the Vietnam War."

Steve Inskeep ended his comment on this picture and its history saying it showed Americans "the brutality of war." As if war were a natural disaster, like a hurricane or a tornado or an earthquake. When, in fact, war is human; all too human.

It isn't war that is brutal. It is our acceptance of war that is brutal. After the debacle of Vietnam, I was sure this country would think long and hard before going into war again. Instead, it is as we'd been warned: when you have a standing army, you have to find something to do with it. If you don't have a war, you start one. All those soldiers standing around, and all that weaponry, makes the trigger finger itchy. Even our "liberal" Democratic candidates now have to vie for the coveted title of "Commander in Chief." I don't remember Kennedy, or LBJ, or Nixon, or even Reagan, Bush, or Clinton, running to be "Commander in Chief," but that has become the distinctive designation of the President now. It's only the last inevitable shift following our decades long, now generations long, insistence on having a standing army and keeping the weapons of war primed and ready.