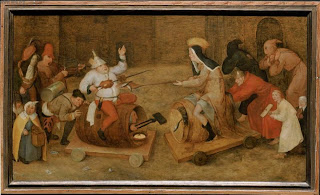 Do you get the feeling that the conservatives are gaming this thing? I knew that you would.

They know they are going to lose. They will blame the loss on the fact that McCain wasn't a real conservative (just like Bush.) They know when to fall back and regroup. They're already playing for the next election.

Everybody sing: Conservatism can never fail, it can only be failed.

Not to pick on Digby, but this phenomenon is neither new nor noteworthy. It's the seductive lure of the Big Idea. Whether you are Dawkins or Dobson, the only significant question is: what do you worship? The Big Idea trumps all. To listen to conservatives at CPAC in this NPR report is to listen to liberals denounce the failure of a Democratic candidate who fails to meet their ideals. Replace "conservatism" in Digby's final sentence with "liberalism" or "progressivism," it would be just as true. Regular folks call it the "purity battle." But it's actually all about power; when you lose it, the failure is not due to the limitations of your idea, but the limitations of the earthly vessel you housed it in. Thus do people say things like this to the current occupant of the White House:

But a telling moment came when Bush was talking about people "swept up in a cycle of addiction, and crime, and hopelessness." Said Bush: "We know that people can change their behavior. Sometimes all it takes is the help of a loving soul -- somebody who puts their arm around a troubled person and says, I love you, can I help you."

Suddenly, as Gillman reported, a woman shouted out very loudly, "I love ya Dubya!"

Bush responded: "My soul is not that troubled, but thank you."

Even as they rally, per Digby's original post, to denounce McCain and so spare themselves from embarassment. As Kierkegaard noted: "The condition for man's immortality is that life is uno tenore." Just a question, then, of which tenore is uno for you. Thus does Ronald Reagan ascend toward political sainthood in some circles, even as we get further and further away from his death. After all: "In recollection, a person draws on the eternal." And nothing is so eternal as death, nothing so unchanging as the eternal. Thus do we all hope our one course will be the path to our immortality.

Christianity calls it "original sin." Same as it ever was.