Two books came into the store the other day; which should I add to my reading list?

The Age of American Unreason, by Susan Jacoby. This one, I'm told, combines historical analysis with contemporary observation. Unfortunately, all too true. When I flip the book open (honest! Serendipity! Synchronicity! Moving of the Holy Spirit! I report, you decide!) this is what I read:

In the United States, Dawkins [yes, Richard D.!] has been attacked not only for his general criticism of religion but for his uncompromising defense of Darwin's theory of evolution. One conservative American writer describes Dawkins as a "poor public intellectual" because, in articulating his views on the randomness of nature, he "appears to be utterly indifferent to the spiritual and emotional difficulties that his writings cause for many readers." It is hard to imagine exactly how anyone might function as a public intellectual while taking care to avoid all issues that might trigger a spiritual, emotional, or intellectual crisis among his or her readers. It is not necessary, however, to be concerned about the emotional difficulties of Dawkins's audience to conclude that he is somewhat off the mark in his assesment of the compromise between faith and reason by what is generally called "moderate" religion.

Which sounds semi-reasonable enough, despite all the appeals to vague and glittering generalities. The "American religious right," we are told, rejects what "moderate religion" tries to accomodate: "secular education and secular government." Well, maybe, but that's rather a broad brush, even for H. Richard Niebuhr. Still, it's the conclusion of this chapter that really brought me up short:

A general attention to the supernatural, extending beyond narrowly defined fundamentalism, lies at the heart of the profound divide not only between religious America and secular Europe but also between devout religious believers and secularists wtihin the United States. "People are reaching out in all directions in the attempt to escape from the seen world to the unseen world," George Gallup, Jr. told a correspondent for U.S. News and World Report in 2002. "There is a deep desire for spiritual moorings--a hunger for God." (p. 208-09)

Now, frankly, even attributing that statement to St. Augustine of Hippo would not be enough for me. The statement of George Gallup, Jr., in a newsmagazine, is a valid statement of the state of American thought, or even spirituality? Really? Well, it is for Ms. Jacoby:

The desire to escape from the seen to the unseen world is not confined to Americans who profess an ultra-conservative form of faith or, for that matter, any form of orthodox faith. "Escape" is the key word: the resurgence of fundamentalism in the United States has occurred within the context of a pervasive nonreligious antirationalism taht reinforces extreme forms of religion and also affects the broader public's views about science, education, and reality itself.

This puts me in mind of Niebuhr's comments on monasticism, sprinkled throughout Christ and Culture. Niebuhr has no truck with the monastic life, and it finally becomes clear his knowledge of it is Luther's late-in-life rejection of its validity, where he labelled it a "retreat" from the world. Of course, one need only read Kathleen Norris' work to know the monastic life is still lived among people, strangers mostly, whom one is forced to live on intimate terms with for the rest of one's days. Rather like family, you don't get to pick 'em, not entirely; and anything involving living with other people can't really be called a withdrawal from the world. Still, we are all experts on what we have the least experience with, so Ms. Jacoby sinks to some very risible stuff indeed, and maybe even correct; but I submit, no more grounded in reality than the natterings of David Brooks on American sociology or the pronouncements of any TV pundit on why people are voting for John McCain, Barack Obama, or Hillary Clinton. When in doubt or without data: pontificate! And by the way, how does this desire for "escape" coincide with the resurgent interest of fundamentalists in American politics, an interest which, based on the tallies for Mike Huckabee recently, has yet to abate? And Joel Osteen is still packing them in preaching about what will be seen if you just have as much faith and as kind a smile as he does. God wants you to be rich, is Mr. Osteen's pitch, and there ain't nothin' "unseen" about that appeal.

So I don't really get it. 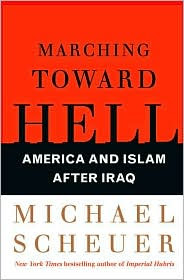 The other book is: Marching Toward Hell: America and Islam After Iraq, by Michael Scheuer, someone presented as a 20 year veteran CIA analyst and former head of the "Osama Bin Laden" unit. Mr. Scheuer's thesis is encapsulated on the back dust jacket (he lacks the words of tribute from Douglas Brinkley, Marcia Angell, Helen Thomas, Frederick Crews, and Jack Miles that grace Ms. Jacoby's volume; I'm thinking that's probably a good thing.):

As I researched this book, I became fixed on a single question: "Is there protection of U.S. interests and American citizens, and the maintenance of American sovereignty, independence, and freedom of action, any longer the primary, overriding concern of the U.S. federal government?" The answer should obviously be an emphatic yes, at all times and on every issue.

And yet the more I read and researched, the more I encountered the discrepancy betweeen the words and deeds of U.S. leaders, as well as the vast gulf between their description of the world adn the world as I perceived it in my twenty-plus years as a counterterrorism analyst. And, as I looked closely, I became increasingly doubtful if the answer to the pivotal question above could be even a timid yes.

Since 9/11 there has been a war between two opponents. One one side are the Islamists, fighting in deadly earnest for fully explained reasons and limited objectives; on the other, the United States, grandly assuming inevitable victory ove a foe that exists only in its mind.

My aim in writing this book was to point a finger at the unnecessary and self-defeating mistakes the United States has made since 9/11--political, diplomatic, military, and intellectual--mistakes that could have been avoided had our government paid attention to history and put America first.

The preface to the book makes clear the thesis: that "the much ballyhooed and nearly beatified 'bipartisan approach' to post-Cold War foreign policy played out its string and collapsed" in the sands of Iraq; and, of course, nothing has been learned from that. This book may be as wrong as Ms. Jacoby's may be right. But Mr. Scheuer's book is packed densely with data and details, and proceeds carefully from one well considered proposition to the next, never launching filament purely out of itself (or others) into the air, assuming it has become anchored somewhere across the void. Ms. Jacoby's book just puts me in mind of a lot of what I read already; and Mr. Scheuer's book reminds me of what's missing in the public discourse. I think that's a pretty strong recommendation.

And to bring this back (abruptly) to the other discussion, this gem from Nicholas Kristoff, who surely means well, but who just as surely should know better. His column today is about Gitmo and torture, but on the way he drops this burning insight:

Most Americans, including myself, originally gave President Bush the benefit of the doubt and assumed that the inmates truly were “the worst of the worst.” But evidence has grown that many are simply the unluckiest of the unluckiest.

Which is why, of course, we have a legal system. Because we never assume any one government official is wise enough to know who the "bad guys" are, nor do we give that government official unlimited power to do what he thinks best. Everytime we've done that in American history, we've regretted it. It's always the fact that the evidence shows those declared "evil" (Native Americans; slaves; Japanese Americans during World War II; German-Americans during World War I) are "simply the unluckiest of the unluckiest").

When will we ever turn from vague and glittering generalities to carefully considered facts? Not any time soon, apparently.