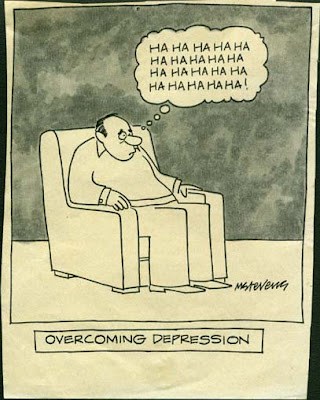 Funny (you should pardon the pun) this should come up:

"The trouble with the emphasis in conservatism on the market," Buckley told me, "is that it becomes rather boring. You hear it once, you master the idea. The notion of devoting your life to it is horrifying if only because it's so repetitious. It's like sex."

Funny only because of the synchronicity, because last night I started Kathleen Norris' next book, Acedia and Me. It is a true return to form for her, and a concept that should be familiar to anyone who knows her autobiographical work.

She spends a fair amount of time in the beginning of the book trying to explain what "acedia" is; how it is distinguishable from laziness or ennui or depression; how it is has gone in and out of fashion (it was considered "obsolete" as a word in the 1933 OED, then came back in the 1972 and 1986 supplements); things like that. Perhaps the best way to explain it, is this story from Evagrius Pontikus in the 4th century:

The demon of acedia--also called the noonday demon--is the one that causes the most serious trouble of all. He presses his attack upon the monk about the fourth hour and besieges the soul until the eighth hour. First of all he makes it seem that the sun barely moves, if at all, and that the day is fifty hours long. Then he constrains the monk to look constantly out the windows, to walk outside the cell, to gaze carefully at the sun to determine how far it stands from the ninth hour [or lunchtime], to look this way and now that to see if perhaps [one of the brethren apppears from his cell]. Then too he instills in the heart of the monk a hatred for the place, a hatred for his very life itself, a hatred for manual labor. He leads him to reflect that charity has departed from among the brethren, that there is no one to give encouragement. Should there be someone at this period who happens to offend him in some way or other, this too the demon uses to contribute further to his hatred. This demon drives him along to desire other sites where he can more easily procure life's necessities, more readily find work and make a real success of himself. He goes on to suggest that, after all, it is not the place that is the basis of pleasing the Lord. God is to be adored everywhere. He joins to these reflections the memory of his dear ones and of his former way of life. He depicts life stretching out for a long period of time, and brings before the mind's eye the toil of the ascetic struggle and, as the saying has it, leaves no leaf unturned to induce the monk to forsake his cell and drop out of the fight. No other demon follows close upon teh heels of this one (when he is defeated) but only a state of deep peace and inexpressible joy arise out of this struggle.

Acedia, as Norris explains, drains the joy out of living, out of life that God means for us to enjoy; it drains that joy away, and we have no one but ourselves to blame for that loss, yet that is precisely why acedia is so hard to combat: because we are fighting ourselves. And where am I going with this? Where Norris goes, in stories from her own life: the concept, the reality, the tedium of the quotidian, which is one source of acedia: repetition.

I was a bratty kid who didn't want to make her bed.

"Why bother?" I would ask my mother in a witheringly superior tone. "I'll just have to unmake it again at night." To me, the act was stupid repetition; to my mother, it was a meaningful expression of hospitality to oneself, and a humble acknowledgment of our creaturly need to make and remake our daily environments.....

One of the first symptoms of both acedia and depression is the inability to address the body's basic, daily needs. It is also a refusal of repetition. Showering, shampooing, brushing the teeth, takine a multivitamin, going for a daily walk, as unremarkable as they seem are acts of self-respect. But the notion of pleasure is alien to acedia, and one becomes weary thinking about doing anything at all. It is too much to ask, one decides, sinking back on the sofa. This indolence exacts a high price. (pp. 13-14)

One more quote, then:

Repetition is at the heart of monastic life, which is one reason my attraction to it seemed odd at first. Morning, noon, and evening, monks return to church to pray the psalms. When they have gone through the entire cycle of one hundred fifty psalms, a process that takes three or four weeks, they begin again, day after day, year after year. In a similar way, a community reads through major portions of the Bible. Every Advent, on hears Isaiah, and during Easter, the Acts of the Apostles and Revelation. And elderly monk, disparaging the romantic image of monastic life, once said to me, "People don't realize how much of it is just plain tedium."

But it is tedium with a purpose. To support themselves, the first Christian monks spent their days weaving palm branches into baskets and ropes they could sell. And as they worked, they prayed....[T]he monks...regarded this repetitive work and prayer as their way to God, hoping that over time the "straw" of mundane tasks could become the "gold" of ceaseless prayer." (p. 18)

Repetition: it is essential to daily life, but it is so tedious and the world offers us so many diversions, so many ways to "pass the time" and "spend" the hours until, to wander into Wordsworth's fuzzy pantheism, "so little we see in nature that is ours."

None of which has anything to do with the prattling nonsense of Buckley and Kristol. Such talk of entitlement is anathema to Christianity (though you'd seldom know that, to hear Catholics like Buckley, or Protestants like James Dobson, talk). But the use of the word, in that context, just struck me as more than coincidental. And acedia is something I've been wrestling with for many years now. I thought I was trying to embrace the tedium of repetition, the security of the humdrum (there is nothing secure nor repetitive in being only partly employed for so many years); now I realize I've been sinking into it, seeking out the repetitive in order to hide in my acedic existence. It isn't quite the joy Evagrius describes, so perhaps the demon is not yet defeated. But as Norris says:

As any reader of fairy tales can tell you, not knowing the true name of your enemy, be it a troll, a demon, or an "issue," puts you at a great disadvantage, and learning the name can help set you free. (p. 4)

Maybe that's only as far as I've gotten; to be able to call the name. Well, good enough, for now.