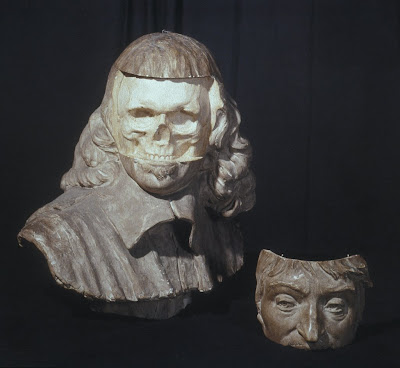 Now I'll try to explain myself.

Start with the fact that Nigeria is not in such great shape to begin with:

Oil fouls everything in southern Nigeria. It spills from the pipelines, poisoning soil and water. It stains the hands of politicians and generals, who siphon off its profits. It taints the ambitions of the young, who will try anything to scoop up a share of the liquid riches—fire a gun, sabotage a pipeline, kidnap a foreigner.

Nigeria had all the makings of an uplifting tale: poor African nation blessed with enormous sudden wealth. Visions of prosperity rose with the same force as the oil that first gushed from the Niger Delta's marshy ground in 1956. The world market craved delta crude, a "sweet," low-sulfur liquid called Bonny Light, easily refined into gasoline and diesel. By the mid-1970s, Nigeria had joined OPEC (Organization of Petroleum Exporting Countries), and the government's budget bulged with petrodollars.

Everything looked possible—but everything went wrong.

Dense, garbage-heaped slums stretch for miles. Choking black smoke from an open-air slaughterhouse rolls over housetops. Streets are cratered with potholes and ruts. Vicious gangs roam school grounds. Peddlers and beggars rush up to vehicles stalled in gas lines. This is Port Harcourt, Nigeria's oil hub, capital of Rivers state, smack-dab in the middle of oil reserves bigger than the United States' and Mexico's combined. Port Harcourt should gleam; instead, it rots.

And what is ++Akinola concerned with? Homosexuals:

Mac-Iyalla, whose offence has been to try and organise a movement for gay Christians in Nigeria, has been regularly smeared and denigrated by the church authorities there and has been threatened and physically assaulted sufficiently often for him to seek sanctuary, first in nearby Togo and now here. The fact that the immigration authorities in Britain believe his story sufficient to give him protection and allow him to stay ought to suggest to the Archbishop of Canterbury and his colleagues that all is not necessarily sweetness and light in the Nigerian Church, whose bishops are boycotting their conference because of their opposition to mingling with "apostate" gay-friendly bishops.

It calls to mind the lesson learned by Candide: "We must all tend our own gardens." Yet Akinola clearly cannot tend his garden, because he can't sleep at night for thinking about homosexuals walking 'round on God's good earth, and, worse yet!, being treated as equals in his church. Well, that much is painfully obvious, isn't it?

The Archishop of Canterbury, Rowan Williams, preached at St Dunstan's in Canterbury this morning. He said: 'Churches that are divided and fearful and inward-looking don't easily give that message [that the Church is a gift]; and our Anglican family badly needs to find some ways of resolving its internal tensions that will set it free to be more confidently what GOD wants it to be. ....We'll be praying, then, that GOD will help us sort out some of our tensions as we listen to this good news – so that we can go on saying it with joy and conviction to the world around.'

Sorry to be so unkind, but it's funny, isn't it, how often we can't solve a really tough problem we have created, and so we just toss it up in the air and yell at God: "Catch! Hah, you touched it last! Now it's your problem! Solution, please!!!!" And we extend our hand, palm open, fingers flicking, a la Stephen Colbert. And these "internal tensions" are all about that "law" that we so much admire, so much despise, depending always on whose ox is being gored. Law is always more important to us than love, because law keeps us in control, sets boundaries, allows us to choose our enemies. Love is unfocussed, undetermined, forces us to care equally about everyone, but then how do we get along in the world, according to the world's boundaries and preferences? I have no doubt homosexuality is not widely accepted in Nigeria. How dare the Americans accept it, then!

The latest rumours here are that the third and final observations document of the Windsor Continuation Group, to be published tomorrow, Monday, will take a strictly Dar es Salaam line on the issues facing the Communion. So TEC is to be told: 'Fall into line, or else...' Boundary crossing will also be condemned. The formula that will be embraced is that promoted by the likes of Fulcrum and the Bishop of Durham Dr Tom Wright. This is from the Bishop of Durham Dr Tom Wright's mid-term letter to his flock back home: '..this is the first time for nearly a year that I have had more than seven consecutive nights in the same bed, so I am glad of some stability at least!'

Stability, you know, is all; especially when "the peace of God, it is no peace/but strife sown in the sod." Better to seek humankind's peace, then, or at least to impose it, so we can get some stability back. The Son of Man may have had no hole or den or place to lay his head, but the rest of us need seven consecutive nights in the same bed if we're going to get anything done!

You're thinking by now this has descended into snide and obvious observations on a vexed situation which I have turned my professional and ordained back on, so why am I here but to rub salt into wounds? No, I'm not interested in that. This isn't "Pick on the Anglicans Day" at Adventus. I offer no privileged perch from which to carp at others. There is truly a problem here, and it isn't just the problem of power, of institutions and their needs, even of what kind of ecclesiology we are going to uphold. After all, one of the more awkward paradoxes of Christianity is that while we see it, especially after the Reformation, as almost unalterably focussed on the individual, the Anglican Communion especially shows us that all worship is a corporate, and a communal, matter. We do not come to God alone, as existential units, and we do not seek God's presence so we can be alone. But then this brings us to the heart of the matter: if our faith and our belief calls us into communion, if the very basis of our worship is to be together as fellow servants, how do we do that? The simple answer is: we put God at the center, not ourselves. But that only brings us to the deeper problem, which is the one I've been trying to get us to:

In the final analysis [of Christian mystery], the soul is not a relation to an object, however noble (like the Platonic Good) [which implies, therefore, "such as in Platonism where it is the relation to a transcendent Good that also governs the ideal order of the Greek polis of the Roman civitas"], but rather to a Person who sees into the soul without being accessible to view. What a Person is, that really is not adequately thematized in the Christian perspective.

The Person we have not adequately thematized is not merely the homosexual, or Mac-Iyalla; nor is it simply decided by settling on whose image of God is reflected by the greatest number of people:

Bishop David also has an interesting analysis of how many Anglicans the 650 bishops at Lambeth actually represent. About 44 million, he figures, of which nearly 40 million are Global South Anglicans represented equally at Gafcon.

It is settled, not by considering any of these human things, but by considering the most personal and at once most corporate question of all: just how do we understand this "Person who sees into the soul without being accessible to view"? Because until we answer that question, all the rest is bafflegab and foofawrah. And the very fact that we can't answer it is why we either insist we know what the answer is, or toss the whole thing in the air while shouting "Catch! You're it!" at the clouds. Which, of course, brings us directly to this:

The inadequacy of this thematization comes to rest on the threshold of responsibility. It doesn't thematize what a responsible person is, that is, what it must be, namely this exposing of the soul to the gaze of another person, of a person as transcendent other, as an other who looks at me, but who looks without the-subject-who-says-I being able to reach that other, see her, hold her within the reach of my gaze. And let us not forget that in inadequate thematization of what responsibility is or must be is also an irresponsible thematization: not knowing, having neither sufficient knowledge or consciousness of what being responsible mean, is of itself a lack of responsibility. In order to be responsible it is necessary to respond to or answer to what being responsible means. For it if is true that the concept of responsibility has, throughout a history that is as consistent as it is continuous, always implied involvement in action, doing, a praxis, a decision that exceeds simple conscience or simple theoretical understanding, it is also true that the same concept requires a decision or responsible action to answer for itself consciously, that is, with knowledge of a thematics of what is done, of what action signifies, its causes, ends, etc. In debates concerning responsibiliy one must always take into account this original and irreducible complexity that links theoretical consciousness (which must also be a thetic or thematic consciousness) to 'practical' conscience (ethical, legal, political), if only to avoid the arrogance of so many 'clean consciences.' We must continually remind ourselves that some part of irresponsibility insinuates itself wherever one demands responsibility without sufficiently conceptualizing and thematically thinking what 'responsibility' means; that is to say everywhere.

In order to be responsible it is necessary to respond to or answer to what being responsible means. For it if is true that the concept of responsibility has, throughout a history that is as consistent as it is continuous, always implied involvement in action, doing, a praxis, a decision that exceeds simple conscience or simple theoretical understanding, it is also true that the same concept requires a decision or responsible action to answer for itself consciously, that is, with knowledge of a thematics of what is done, of what action signifies, its causes, ends, etc.

A sentence worthy of Proust (Help me! I'm starting to think like a Frenchman!) A praxis, a doing "that exceeds simple conscience or simple theoretical understanding." Derrida is talking in the context of the akedeh, the binding of Isaac atop Moria, the raising of the knife, the beginning of the awful descent of the blade; and of Johannes de Silentio's reaction, and analysis, and consideration, of that seminal story. Simple theoretical understandings won't work on these fundamental issues who "Who is the church?" and "Who is in charge of the church?" Something more fundamental must be called into examination. Something as fundamental as the observation that: "What a Person is, that really is not adequately thematized in the Christian perspective." And here it's "Person" in both senses of the word: as a substitute for a reference to God; and as a reference to the Son of Man, as Jesus originally used it: the human one. People. Us. Individuals. You know, the ones who make up groups, communities, churches, communions, corporate bodies, societies. What is the "theme" of "Person" in a Christian perspective? Obviously it is very different for Akinola than it is for Mac-Iyalla, or Rowan Williams. So that's where we need to start: in the foul rag and bone shop of the heart.