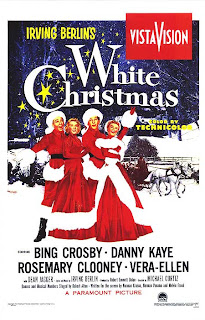 Which is beginning to sound a lot like what John McCain is doing as questions about his home ownership continue to dog him. Politics as bad musical comedy. But that raises a question: if he's Danny Kaye, why are we Bing Crosby? When did John McCain ever save our lives? What did he do that didn't happen to some 600 military POWs in Vietnam? The answer should be: "Nothing." But the real answer is related to this image: 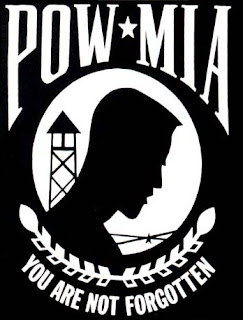 In my memory, the image above went up on billboards and flags and stickers almost before we announced the withdrawal of troops from Vietnam. In my memory, it predates the famous picture of the last helicopter lifting off in Saigon, people trying desperately to cling to it. My memory is almost certainly wrong, but the guilt and shame encapsulated in that famous helicopter echoes in the logo above, which became the emblem of loss in Vietnam. Our government didn't try hard enough to win, and so abandoned POW's and MIA's to the brutality of their North Vietnamese captors. It was a more enduring and pernicious myth than the "spitting on soldiers" story. We told ourselves (as many still say, including John McCain) that we could have won Vietnam if the government hadn't stopped us, or if the people had "supported the troops."

All, of course, convenient lies to keep us from considering whether we should have been involved in that war in the first place; and from accepting the fact that we lost a war, and are losing another one (the only reason McCain insists we must stay in Iraq until we "win," though he can never say what "win" means). And now the long shadow of the POW-MIA issue tries to cover the Presidential race of 2008. The "meme" is that John McCain is a former POW, which makes him a hero by default, which means we can never speak ill of him. It is, of course, being run into the ground by the McCain campaign. But who does it really resonate with, and why?

My own perception is that the meme is being repeated by pundits and TV anchors, almost all of whom are either Baby Boomers or pre-Boomers. It's an informal review, but I don't remember hearing Rachel Maddow ever bring it up on "Countdown", though of course Keith Olbermann has paid obeisance to it. Roy Sekoff has never mentioned it on "Verdict" (you see now what news programs I watch regularly), but Bob Schieffer famously brought it up with Wesley Clark. It seems to be a topic that means a lot to people my age or older. People, that is, who remember the end of the Vietnam War and the POW-MIA flags and stickers, who remember that reflex of national guilt and shame we expressed in a series of Sylvester Stallone and Chuck Norris movies.
But that can't mean much to people younger than us. It seems to make a great deal of difference to people who publicly state their opinions for a living, and therefore are chary of stating an opinion that might get them socially ostracized (unlike, say, Rick MacArthur, who seems willing to say whatever he damned well pleases, and usually makes more sense than your average media pundit), but only to those people who remember how Vietnam ended, rather than those who learned it as history. It's understandable reaction, for those of us who have those memories. One is forced to notice that most prominent pundits who don't defend McCain as a knee-jerk reaction, defend him because they are Boomers themselves. Which says more about the age of our punditry than it does anything else; it also underlines the problem McCain has with voters: his weltanschaaung was formed in the '60's, as were those of many of today's pundits. But that was 40 years ago, and a new generation has grown to adulthood and even parenthood in that time, with yet another generation of voting age behind them, and none of those people (including Barak Obama) were formed in the crucible of Vietnam/Civil Rights/Great Society legislation, that was the '60's.

Not that the pre-Boomers aren't holding on to their mythology as fiercely as possible. Tom Brokaw insists that John McCain is Danny Kaye, and America is Bing Crosby:

He doesn't explain what McCain did to save America. His argument hinges, instead, on McCain as symbol of sacrifice (even though he was one of over 600) and on Bill Clinton as symbol of Boomer selfishness (even though George W. Bush, Dick Cheney, and Tom DeLay all shamelessly avoided that war) . Brokaw is stuck with his myth of the "Greatest Generation," the corollary to which is that the Boomers failed to live up to that generation's legacy (thus Bill Clinton is shamed into recognizing the greatness of John "POW" McCain). But it was the Boomers, as Studs Terkel has pointed out, who actually changed the world for the better. Indeed, much of the world we lament losing under Bush was given to us by the Warren Court and the activists of the 1960's, not by the defeat of fascism and Nazism in the 1940's. All of that is swept aside, however, by the representative of a generation who was born during the war, and came of age not in the '60's, but in the Eisenhower '50's. Once again, the imprimatur of the punditry is that of old white men born long before Barack Obama or many of his most ardent supporters.

The contingent that still thinks like Tom Brokaw hardly seems enough to propel John McCain into the White House. According to the Census Bureau, as of 2006 the majority of the US population was between 18 and 65. Voter turnout was up by 7 million in 2006, and registration of 18-24 year olds was up as well. Voter registration for those over 55 is higher as a percentage of the electorate, but the number of people who remember Vietnam is still smaller than the number who don't, and the portion of that number who can vote are more likely to be attracted to Barack Obama than to 72 year old John McCain. As of the date of this post, Obama has a 23 point lead over McCain among voters aged 18-24.

Just how effective, then, is the claim that "John McCain was a POW"? Especially now that he's using it to defend himself from any questioning at all? Most of McCain's campaign seems to be stuck in the Sixties, like his recent reference to the Cold War, and who "won" it. (And notice McCain can't bring that up without reminding us he was a POW in a war many Americans can't even remember.) Well, that depends on who's listening. Funny thing is, we had a phrase for this situation in the Sixties.

We called it the "generation gap."