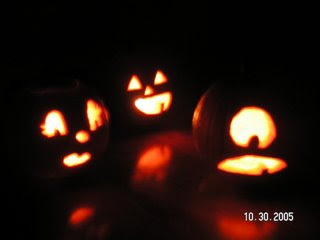 On All Hallow's Eve, let me just ask Amanda at Pandagon:

Why do you think people used to go to church?

19th century America saw an explosion in church singing, for a lot of reasons, not least of which was it gave people a chance for public performance when few such opportunities existed. I remember the "karaoke" of my childhood: shaped note singing in my grandparent's Primitive Baptist church. It was beautiful, even if no one sang the hymns any better than drunks in a bar belting out pop songs, even if the music was printed for people who couldn't read music. Church was the chance to do what people have always loved to do: make music. Make music, that is, without learning to play an instrument or having to perform on stage. Maybe that's the line of demarcation, and certainly the dusty hymn tunes of old are just that: dusty. Some are familiar and comforting, but some are just old. But pop music? Honestly; who can really sing that stuff? And isn't it meant to show off the singer?

Which, I understand, is the point of karaoke, and to each his own, of course. But still, if you're gonna say this:

That’s why Halloween is the perfect day for this. The explosion in Halloween’s popularity tells you the whole story. I’d say in Austin, it’s easily the biggest day of the year, barring the time the Longhorns won the national championship. This is because you have a huge population of adults who have thrown the finger to the whole grow up and get boring process, but the trend is nationwide. The question is no longer “are you going to dress up?” but “who are you going to be?” Performing for others has almost completely lost its stigma, and thank god. The performer enjoys it, and the audience enjoys it (even if they’re waiting their turn). It’s a lot like sex---once the taboo comes off for you, you wonder what you were so worried about for so long.

I'm gonna have to say that's the one thing I hated about Austin: the tiny minority who thought the city existed for them, and were always 'too cool for the room,' and who imagined life revolved around 6th Street and SXSW, when most of us who lived there paid no attention to either (or to Eeyore's Birthday, for that matter, though I always liked the idea of that better).

Yeah, I mean rest of the city: the cranky old guys like yours truly. Those of us who actually worked for a living, and grew up, and found the narcissism of youth boring. I was born old. What can I say?

It's the first highlighted passage I refer to, obviously. The second is another matter, and it speaks to the "American Idolization" of American culture. We are all now stars of our own legends in our own minds. Or something. Nothing against belting one out in karaoke bars, mind you (though it's never gonna be my thing), but "Don't quit your day job" has something of value to those of us actually trained in music. Why not do impromptu Shakespeare, while you're at it? Or put together q quick scene from Beckett? A pick-up version of "Our Town," anyone?

I think there's a reason that hasn't caught on.

And maybe that's the distinction between singing in church, and singing karaoke: both are performance, but there is quite a distinction in the space and the purpose. Sure, there are prima donnas in churches, especially in the choirs. Sure, some people love to sing solos, and it ain't always "to the glory of God," though they will demurely say it is (as they accept the congratulations afterwards).

Technology has a lot to do with this shift in public attitudes about performance and emulation. Social networking, blogging, etc. have created a huge incentive for people to put themselves on display, when previously they may have just kept their opinions mostly to themselves. Video games helped, too. They used to be considered something mainly for children, but now it’s completely acceptable for grown adults to sit down and pretend to be someone else doing crazy stuff for long periods of time. If you think about it, games like Rock Band and Guitar Hero (and now DJ Hero, which we just got yesterday, apologies for the lack of an evening post) were inevitable, and they landed at just the right time to explode in popularity. Even a few years earlier, I think more people would be wildly ashamed to strap on a plastic guitar and pretend to play it. Nowadays, though? People fight to get the chance. On the negative bent, I think the ubiquitous reality TV shows have also pushed along this further.

Again, my first thought is: "There's a reason for that." And, again, I'm old enough and cranky enough to not exactly celebrate this as a "good thing." Yes, technology has changed our expectations, but it seems blogging and social networking has mostly convinced us of the importance of ME! Which was the other nice thing about singing in church: you didn't have to listen to you. Singing weakly as the organ thunders out, or strongly in a congregation with no other instruments than voices, you madea joyful noise and became a part of something larger, maybe even better, than yourself.

I still remember the Christmas Eve service I sang with a boy's choir. We had practiced Britten's "Ceremony of Carols" for what seemed like an eternity, and when we sang that night, we were part of a program with other choirs and the pipe organ. So, besides our singing, there was a lot of standing and listening (and being grateful I didn't have a solo!) In the final song, one we had practiced but never with the other choirs, everybody sang as the organ roared and thundered, and I felt my voice joining all the other voices, the voices together becoming an instrument equal to the organ, but all just human throats and tongues and teeth and mouths. And I had the closest thing to a mystical experience I've ever had in my life. I rose out of myself, almost lost myself, in that great instrument of song and praise and joy we were all making. We were all one instrument, and for that brief instant any sense of self as almost entirely lost. 40+ years later, almost all the details of that night are gone, but I still have that one.

Try having that experience with Karaoke.

Tomorrow, I need to find church where we can belt out "For All the Saints" together, and nobody has to listen to me. It won't be the day after Hallowe'en without it.