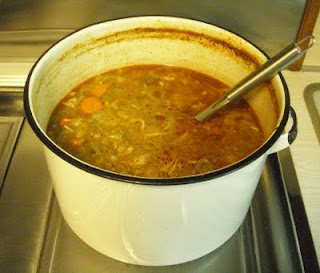 I have been following the latest contretemps in the Anglican Communion at a respectful distance, and mostly through Wounded Bird, from whom I take most of this (including the picture of Grandpere's soup!). The issue, of course, is the sudden invitation of Rome to disaffected Anglican congregations and clergy:

Thousands of Anglicans could defect to the Roman Catholic church after the pope today approved a new global institution to receive them.

It will be the first time since the Reformation in the 16th century that entire Protestant communities have reunited with Rome. The first group likely to take advantage of the new rules is the Traditional Anglican Community (TAC), which broke off from the rest of the community in 1991 and claims to have more than 500,000 members worldwide.

Other groups unhappy with developments in the Anglican Communion are also expected to accept the invitation from the Vatican. Traditionalists, including thousands in the Church of England, have long threatened to defect to Rome over issues such as the ordination of women and gay people.

It sounds a lot like the old dream of re-uniting the Christian church, a dream that goes back to the Great Schism between Rome and Greece. That's a topic in itself, of course, but I've been reading about it in reference to church and European history, in R.W. Southern's Western Society and the Church in the Middle Ages (Penguin, 1970). He provides an excellent context for this discussion, especially as we imagine the Church in Medieval Europe as to be power incarnate:

The ecclesiastical organization elaborated between 1050 and 1300 was the most splendid system, both theoretically and practically, that the church has ever known. It was provided with the most formidable array of teeth to be used against offenders, but they could seldom be used effectively against the current of any widespread secular interest. This was the inescapable dilemma. The rules of law could be immensely elaborated, and within the limits imposed by human craft and frailty they could be made effective within the clerical body. But outside this body they were truly effective when they coincided with the general run of secular interests.

Southern notes that even excommunication was not the "death penalty" we all imagine it to be, because once you were thrown out of the church, the church no longer had any control over you, and at least one ruler lived under this "sentence" for three years, before reconciling with the church and returning to the fold. Such a return reflected a compromise on both sides, not necessarily a one-sided capitulation. Excommunication was the church's greatest power, but it never matched the coercive power of the state; and the Church was never able to lead the people to places the people didn't want to go.

In the matter of trade, for instance, canon law in the early twelfth century still spoke of it as an occupation scarcely compatible with Christianity. But as the growing needs of society produced more elaborate forms of commercial organization, the ecclesiastical lawyers began to have other thoughts...and the restrictions that remained were largely ignored or circumvented.

So the situation in the Anglican Communion is neither new, nor unique, and in some parts of the Communion (especially The Episcopal Church) the "ecclesiastical lawyers" have to have other thoughts, if the church is going to remain a church at all.

Politics, too, plays a role in all communal endeavors. It is certainly an issue in any discussion of "reunification."

"But convert clergy may not find life as good as they had hoped, despite being freed from the terror of meeting woman priests and having to bless civil partners rather than excoriate them, Vatican-style, as “intrinsically disordered”. Despite the modified prayer book they will find their style and even pastoral advice gravely restricted; they may flinch at the uncompromising voice of the Vatican after the gentle bleating of Cantuars.

"Anglicanism was founded on uneasy compromise, and this has, over centuries, made it kindly and even humble: a mixed salad of a faith. Catholicism is older, darker, strong raw meat. It may choke them."

I suppose from the Roman perspective Anglicanism is a "mixed salad of a faith." From my Protestant and congregationalist perspective, it seems quite orderly, indeed. I would hesitate, simply out of respect, to label Catholicism as "darker, strong red meat," but I take the point of the metaphor: "Be careful what you ask for. You might get it."

This certainly fits the tenor of responses from clergy on this issue:

Assimilating a lot of people who perhaps have struggled, and some might even say haven’t made a raging success of living within their own tradition, you’ll get two sorts of “convert”:

1. people who really should try out and perhaps are called by God to be part of the Roman tradition: Hip, hip, hooray!

2. people who aren’t terribly good at living in any tradition on anything but their own terms.

Catholics and Episcopalians, who are nearly Catholic (but perhaps not nearly enough), and Lutherans (to some degree in the same boat), come closest, from what I know of Christianity in America, anyway, to being "discipled" and disciplined about their religious activities. Protestants, on the other hand, tend more strongly toward "baptized heathens" at one extreme, or simply more interested, at the other, on "living in any tradition on...their own terms." Presbyterians have an order that is not entirely orderly; Baptists are congregationalist, with almost nothing binding them to each other at all. The UCC, in which I am ordained, is an awkward mix of Presbyterianism and congregationalism, and as a result tries to make pronouncements the congregations have no connection to, and on the other hand has no control over its congregations whatsoever. It's a very mixed bag, in other words, and there the troubles begin.

Any group of people is going to conduct its affairs according to familiarity and how "they've always done it this way." Submission to the yoke of Jesus, be it light or heavy on the shoulders, is ever the struggle of the Christian believer. One question, of course, is: "Who's yoke is it, anyway?" Various denominations of Christianity attempt to answer that in various ways. As the good Bishop says:

people should serve within the denomination in which they can best be discipled.

But how can they best be discipled? That's the issue; and the answer is, that second set of converts are the very people who don't want to be discipled. The church cannot refuse them (I don't think the church can refuse anyone, but I'm very open-minded about church "membership"); but should the church, in any form, count it a gain to have them?

Seen from a distance, this looks like a distinct "win" for the Roman church, and it is largely being treated that way. But is it entirely doctrinal, and not at all political? That seems dubious, not to mention contrary to history both ancient and modern:

On the eve of another damning report on clerical abuse and cover-up in Ireland, that seems to be Pope Benedict’s tactic. His sudden invitation to Anglican defectors will certainly take the spotlight off a continuing child abuse scandal fed, for decades, by the masculine and intimidating structures of authority in the Catholic hierarchy.

The Archbishop insists this is not about politics (the "existing relations between our two communions"):

It remains to be seen what use will be made of this provision, since it is now up to those who have made requests to the Holy See to respond to the Apostolic Constitution; but, in the light of recent discussions with senior officials in the Vatican, I can say that this new possibility is in no sense at all intended to undermine existing relations between our two communions or to be an act of proselytism or aggression. It is described as simply a response to specific enquiries from certain Anglican groups and individuals wishing to find their future within the Roman Catholic Church.

But if this isn't about the relations between the two communions, what is it about?

And that's the view from the top. Seen on the ground, where such things actually take place, the picture may be very different. I've had some experience with this, apart from congregations quite unwilling to be "discipled." When I left my congregation (or they told me to leave, to be more precise), I contacted various denominations which had arranged to take me as an ordained pastor, even though I wasn't ordained in their denomination. A sort of agreement of reciprocity, if you will. It turned out the judicatory bodies were, by and large, quite comfortable with the administrative process; but the local congregations, by and large, were not interested at all. It is one thing to make a pronouncement from "above" about how things will be from now on. It is quite another thing to live out the consequences of that decision, in the parish.

And then there is the question of where to put all these people, if they want to come with their traditions and liturgies, but can't bring the physical property with them.