Give the King your justice, O God! 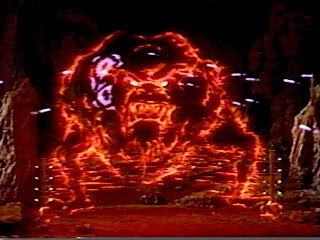 And reporters a sense of professional responsibility. Not really my turf, but compare this AP article, found in the Chicago Tribune (i.e., about as far north from Texas as the lower 48 can go):

Gov. Rick Perry, seeking to defuse an election-season controversy over the 2004 execution of Cameron Todd Willingham, described Willingham on Wednesday as a "monster" and "bad man" whose conviction in the deaths of his three daughters was sustained "every step of the way" by the courts.

Perry lectured reporters for being preoccupied with "all these sideshows" instead of looking at the facts that led to Willingham's conviction. He challenged journalists to "go back and look at the record here because this is a bad man."

Perry described Willingham as "a guy who murdered his three children, who tried to beat his wife into an abortion so that she wouldn't have those kids."

with this article from the Corsicana Daily Sun:

“Willingham was a monster. He was a guy who murdered his three children, who tried to beat his wife into an abortion so that he wouldn’t have those kids. Person after person has stood up and testified to facts of this case that quite frankly you all aren’t covering,” Perry said.

At trial, Willingham’s wife, Stacy, testified for him during the punishment phase, denying he ever hurt her. Acquaintances, however, said she told them he’d beaten her several times, even while she was pregnant.

Apparently Gov. Perry has a very loose concept of what "testimony in court" actually means.

I skimmed a few of the articles at Google, but didn't find one that mentioned this bit of information. What this amounts to, both in court and out of court, is gossip, not evidence. And where Perry gets the idea he was beating her because she wouldn't have an abortion, is never explained. (And as I read it again, it doesn't even make sense: Willingham "beat his wife into an abortion" so she wouldn't have the three girls he allegedly murdered by fire? Huh?) The Governor has refused to release the evidence he reviewed in this case, but now he's using whatever he saw to defend his decision. Perhaps this is what he's thinking about:

Though only the babysitter had appeared as a witness for the defense during the main trial, several family members, including Stacy, testified during the penalty phase, asking the jury to spare Willingham’s life. When Stacy was on the stand, Jackson grilled her about the “significance” of Willingham’s “very large tattoo of a skull, encircled by some kind of a serpent.”

“He just likes skulls and snakes. Is that what you’re saying?”

The prosecution cited such evidence in asserting that Willingham fit the profile of a sociopath, and brought forth two medical experts to confirm the theory. Neither had met Willingham. One of them was Tim Gregory, a psychologist with a master’s degree in marriage and family issues, who had previously gone goose hunting with Jackson, and had not published any research in the field of sociopathic behavior. His practice was devoted to family counselling.

At one point, Jackson showed Gregory Exhibit No. 60—a photograph of an Iron Maiden poster that had hung in Willingham’s house—and asked the psychologist to interpret it. “This one is a picture of a skull, with a fist being punched through the skull,” Gregory said; the image displayed “violence” and “death.” Gregory looked at photographs of other music posters owned by Willingham. “There’s a hooded skull, with wings and a hatchet,” Gregory continued. “And all of these are in fire, depicting—it reminds me of something like Hell. And there’s a picture—a Led Zeppelin picture of a falling angel. . . . I see there’s an association many times with cultive-type of activities. A focus on death, dying. Many times individuals that have a lot of this type of art have interest in satanic-type activities.”

The other medical expert was James P. Grigson, a forensic psychiatrist. He testified so often for the prosecution in capital-punishment cases that he had become known as Dr. Death. (A Texas appellate judge once wrote that when Grigson appeared on the stand the defendant might as well “commence writing out his last will and testament.”) Grigson suggested that Willingham was an “extremely severe sociopath,” and that “no pill” or treatment could help him. Grigson had previously used nearly the same words in helping to secure a death sentence against Randall Dale Adams, who had been convicted of murdering a police officer, in 1977. After Adams, who had no prior criminal record, spent a dozen years on death row—and once came within seventy-two hours of being executed—new evidence emerged that absolved him, and he was released. In 1995, three years after Willingham’s trial, Grigson was expelled from the American Psychiatric Association for violating ethics. The association stated that Grigson had repeatedly arrived at a “psychiatric diagnosis without first having examined the individuals in question, and for indicating, while testifying in court as an expert witness, that he could predict with 100-per-cent certainty that the individuals would engage in future violent acts.”

I haven't reviewed the trial transcripts, but I find no indication in the "New Yorker" article that multiple persons testfied, from their personal knowledge or from hearsay (which is what the Governor is citing) that Willingham was a "monster." In fact, the "New Yorker" article concludes: "Aside from the scientific evidence of arson, the case against Willingham did not stand up to scrutiny." The article provides a factual basis for its conclusion. Maybe Gov. Perry would like to share some of that secret information on which he bases his conclusion?

On the other hand, is it really so difficult for a news report to point out the Governor is relying on extra-judicial evidence, or maybe even just plain old gossip? If the local Corsicana paper can do it, why can't the AP?