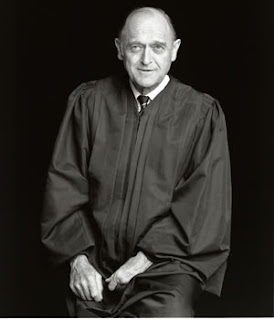 William Wayne Justice died Tuesday, in Austin. I didn't know he was living in Austin, but it seems fitting that he live his last years in the "most liberal" city in Texas, since he spent most of his judicial career in Tyler, one of the most conservative.

Aside from owning a chair once owned by Judge Justice (and bought through a third party; I never even met the man), he is one of the people who had a profound impact on my life. Of course, he had a profound impact on the lives of everyone living in Tyler, Texas in 1970. That was the year Judge Justice brought Brown v. Board of Education to my town. 16 years late, but it finally got there.

I wasn't even born when that decision was handed down in 1954, but I was entering high school when Judge Justice used it to close down the "black" schools in Tyler, and force the "whites" in town to accept their brothers and sisters in schools that could finally no longer be "separate but equal." The changeover wasn't quite as ugly as police dogs being set on civil rights marchers, or police moving in with billy clubs and fire hoses, but it came close. The hatred and animosity in the town were palpable for years, and much of it was directed at Judge Justice, for fearlessly upholding the law, and ignoring the Southern traditions that were too important to too many people with the power to enforce them.

Even as I write this, the article I linked to is being updated, so it may say more when you read it than I allude to as I publish this. However, this comment, to those of us who remember Tyler and how Judge Justice changed it, speaks volumes:

U.S. Magistrate Judith Guthrie of Tyler, a longtime friend, told the Tyler Morning Telegraph that Justice was "a very courageous judge and a great man."

His whole life as a judge was devoted to doing what the law required, according to Guthrie.

Almost 40 years later, we still have to insist he did what he had to do. Plus ça change, plus c'est la même chose.

The story was told once that, after his ruling desegregating the schools, a member of one of the local clubs (I forget which one) told the manager that Wayne Justice was never to be allowed membership in the club. The manager had to tell the member that Judge Justice had been a member of the club for years. This, more than anything, captures his story. He wasn't a firebrand who seemed out of place even in Tyler. Like LBJ, he seemed like an ordinary Texan. But like the best "ordinary Texans," he was extraordinary. His legacy includes reforming the Texas prison system, which he oversaw for years as the judge who had to be sure his rulings on what was, and was not, constitutional in the Texas penal system, were carried out. He did a great deal to change Texas for the better. I know little or nothing about his personal story: whether he ever retired, why he was living in Austin when he died, etc. But I know how he affected my personal story, and the stories of all my friends who were in schools in Tyler in 1970 and after.

As Hamlet said of his father, we won't see his like again. And that is truly a pity. May God's mercy be with him, and with his family.