Jesus on a Dinosaur! 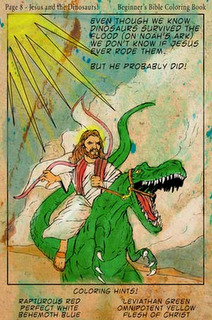 I promised myself I wouldn't bother with Hitchen's babblings on religion (and I'm not too keen on the argument from Pastor Wilson, but that's another matter), but this passage alone made me say: "Huh?"

We do not know, though we may assume, that our pre-homo sapiens ancestors (the erectus, the Cro-Magnons and the Neanderthals, with whom we have a traceable kinship as we do with other surviving primates) had deities that they sought to propitiate. Alas, no religion of which we are now aware has ever taken their existence into account, or indeed made any allowance for the tens and probably hundreds of thousands of years of the human story. Instead, we are asked to believe that the essential problem was solved about two-to-three thousand years ago, by various serial appearances of divine intervention and guidance in remote and primitive parts of what is now (at least to Westerners) the Middle East.

I'm not sure what Hitchens means by "religion," there, because Christianity as I was trained in it at a Christian seminary certainly takes into account "the tens and probably hundreds of thousands of years of the human story." I didn't learn in seminary that Abraham and Isaac and Jacob and even Moses, were real people representing a frozen point in time, or the first people who actually mattered to humanity. Although their stories did have historical roots in identifiable periods in human history, I was taught to place them in human history. I learned that these were stories which were a part of the human story, and that I could learn them as a pastor and still take account of the stories of Gilgamesh (from Babylon) or even the Mississipians (the mysterious mound builders of Cahokia). Indeed, as a thinking person, as a theologian, I have a responsibility to. But that doesn't fit Hitchens's reductio ad absurdum religious view, so he creates a straw man he can easily topple over.

If the scriptures of Christianity or Judaism or Islam (and I note, again, Hitchens scrupulously avoids naming Judaism as one of the three religions of the Book he trashes at every opportunity. Some religious beliefs are apparently more absurd than others.) don't mention humanity before the Tower of Babylon (save for the stories of Adam and Eve), perhaps the problem is, like the Mississipians, they failed to leave records for us to decipher. But by no means has "religion" collectively conspired to take no notice of what archaeology and anthropology have discovered. Indeed, I learned more about archaeology in seminary, and in books I've read since related to Christianity and its origins, than ever I'd read before. (I won't even touch on the absurd issue of "the essential problem" being solved, as I have absolutely no idea what he's talking about. That's pretty much an "insert your prejudice/presumption here" type of statement.)

It isn't religion that is absurd, it is Hitchens's willingness to parade his ignorance so publicly. His ability to form an argument isn't worth much, either.