I will incline mine ear to a parable 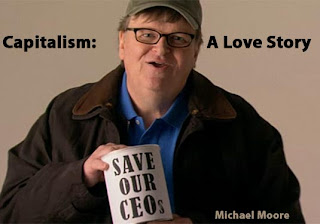 Rightwing critics of controversial film-maker Michael Moore call him many things: a socialist, a hypocrite, unpatriotic – and they even make unkind remarks about his weight.

But, with his new anti-capitalist film showing on US movie screens last week, Moore has unveiled an unexpected trump card against conservatives who so vociferously attack him: Christianity. Moore is a practising Catholic and has put religion at the core of Capitalism: A Love Story. Alongside the political arguments about inequality, Wall Street corruption and the failures of George W Bush, Moore argues that capitalism is also fundamentally unchristian.

But many argue that the astonishment at Moore's gospel radicalism is misplaced. Though recent US political history seems to have been dominated by the rise of evangelical conservatism and its powerful grip on the Republican party, there is a parallel tradition of leftwing priests in America, especially with Catholics. "Catholics have always had a strong tradition in labour and union issues in America. There is not much in laissez-faire capitalism that is actually backed up by Catholic teaching," said Professor David O'Brien, a faith and culture expert at the University of Dayton, Ohio.

Cardinal James Gibbons was a famous advocate of union rights in the early 20th century. Daniel and Philip Berrigan were brothers and radical priests who opposed the Vietnam war. The black civil rights movement was led by clergy, most famously by Dr Martin Luther King.

Certainly the Rev Peter Dougherty appears to be in that tradition. Dougherty, who conducted the marriage service for Moore's sister, has known the Moore family for a long time and was happy to appear in the documentary. He lives in Michigan and has seen the devastation of local industry and unemployment that often seems to provide the motivation for Moore.

Dougherty told the Observer he had no qualms about launching a religious attack on capitalism. "There have always been people who questioned basing a society on greed. That is what capitalism is. It is based on the greed motive, a radical evil. Moore's use of religious arguments in Capitalism: A Love Story also taps into wider issues happening at the fiery place where US politics and Christianity meet. Though the past few decades appear to have been dominated by religious arguments over abortion and other social issues, those culture wars seem to have died down a little.

1Hear this, all ye people;

give ear, all ye inhabitants of the world:
2 both low and high,

rich and poor, together.
3 My mouth shall speak of wisdom;

and the meditation of my heart shall be of understanding.
4 I will incline mine ear to a parable:

I will open my dark saying upon the harp.
5 Wherefore should I fear in the days of evil,

when the iniquity of my heels shall compass me about?
6 They that trust in their wealth,

and boast themselves in the multitude of their riches;
7 none of them can by any means redeem his brother,

nor give to God a ransom for him:
8 (for the redemption of their soul is precious,

and it ceaseth for ever:)
9 that he should still live for ever,

and not see corruption.
10 For he seeth that wise men die,

likewise the fool and the brutish person perish,
and leave their wealth to others.
11 Their inward thought is, that their houses shall continue for ever,

and their dwelling places to all generations;
they call their lands after their own names.
12 Nevertheless man being in honor abideth not:

he is like the beasts that perish.
13 This their way is their folly:

yet their posterity approve their sayings.
Selah.
14 Like sheep they are laid in the grave;

death shall feed on them;
and the upright shall have dominion over them in the morning;
and their beauty shall consume in the grave from their dwelling.
15 But God will redeem my soul from the power of the grave:

for he shall receive me.
Selah.
16 Be not thou afraid when one is made rich,

when the glory of his house is increased;
17 for when he dieth he shall carry nothing away:

his glory shall not descend after him.
18 Though while he lived he blessed his soul,

(and men will praise thee, when thou doest well to thyself,)
19 he shall go to the generation of his fathers;

they shall never see light.
20 Man that is in honor, and understandeth not,