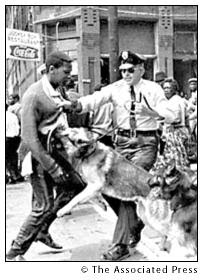 The real ugliness is not being a racist; it's being called a racist.

That national conversation on race in America can't start until we all agree there are no racists anymore. And that race isn't a problem anymore. And if it is, it's a problem because black people keep bringing it up. Which makes them the real racists. So we don't need to have a national conversation on race. We just need to marginalize the racists. Who are black people who dare to suggest some white people who are not Southerners like David Duke (and so already marginalized) might be racists.

Actually, and almost as a longish footnote, I don't think most people think this way, despite the desperate efforts of people like Breitbart, Vandeihei, and Blankley. I think most people understand the complex issue of race in this country. The problem is not with the people, it's with the idea that anything on TeeVee or Talk Radio or on the pages of a newspaper or magazine resembles a "conversation." Even blogging and Facebook and what-have-you, are not technological substitutes for the agora. If there is a problem with the American "conversation," it's that we don't have one, at all; and then imagine mass media (TeeVee, Intertubes, talkradio, etc.) is a proxy for that. It isn't. So I'm not so much outraged, or surprised, at what opinions people have about race, especially whites. While I'm working from Digby, she thinks this means the narrative has shifted. I can only assume Digby is younger than I am by at least a generation. To put the paragraph Digby quotes in context (!):

Gallagher, the radio host, says the appearance of anti-white bias at the Agriculture or Justice Department "creates white racists."

"White people sit around, and they get angry and they think this is the world they live in, and it's not fair. I hear it in the frustration of my callers," he said.

"White America understands by now, you'd better be very careful in the way you treat people of color. In this history of this country that's great advice. That's as it should be. We've had a shameful past," he said. "Now the fear is that the pendulum has swung so far the other way, that white people mind their P's and Q's and don't say anything that can be perceived as racist, but blacks can talk about hurting people."

That one is as old as American racism itself. Whites aren't racist because they consider blacks inferior, or even because their ancestors enslaved Africans, who were notable as slaves because of skin color (the first such kind of slavery in human history, and so the "peculiar institution."). No, it was because blacks made whites racist.

There is a plaque on the backside of a column in the Texas Capitol that purports to honor the "South" in the Civil War, by denying that the war was about slavery, but rather was about "states rights." Which, of course, means it wasn't about being racists and owning people, it was about freedom from government that wouldn't allow Texans to own people (the same reason for the Texas War of Independence from Mexico; Mexico outlawed slavery, and at the time, Texas WAS Mexico.). The plaque dates from the 1950's, about the time the civil rights movement actually got started. And the animosity against blacks in the 1960's was never because they were black, but because they were disruptive, or uppity, or didn't mind their place. It was always the fault of the blacks that the whites had to react so violently.

Same as it ever was. Except most people don't see it that way, now. Most people are appalled by such language, such thoughts. And the Tea Parties and Andrew Breitbart and FoxNews all know it. I don't see this a resurgence of that evil; if anything, it's the last blush on the cheek of a dying age. But bad ideas never really die, so I don't expect this one to. The fact that it is still the subject of open discussion, while disappointing, is not a reason to assume there is something new under the sun.

Or maybe just a conversation that's a little more coherent than that AP article:

Some liberals have long maintained that racism requires power, and so black people can't be racist. Obama's election undercut the first argument and made the specter of black racism appear more threatening.
....
Perry, the Princeton professor, pointed out that blacks have 10 cents of wealth for every dollar possessed by whites.

"We can hardly say whites as a group are suffering under the weight of racial discrimination. That said, we do have to find ways of talking about race with more openness but also with greater sensitivity," she said.

"There is a lot of work for everyone to do in this regard, and people of color are no exception."