"What do you have to do? Shoot Medgar Evers?"--Chris Rock 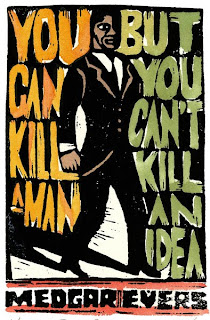 I had gotten this far:

Alberich makes me think we should put this "Sherrod affair" in context:

BTW, I am curious about something. We are having an excellent conversation about race, class, etc. here. But still ... I wonder. I, for one, happen to be white, middle class, etc. (although my wife happens to be African-American and our daughter's biological father is Afro-Hispanic).

Not to be nosy or racially labeling myself, but is this conversation about race and class, even here, still being had by white, middle class folks like myself?

So I start with the facts compiled by Frank Rich:

If we are to learn anything from this travesty, it might help to retrace the racial soap opera that immediately preceded and provoked it. That story began on July 13, when the N.A.A.C.P. passed a resolution calling on the Tea Party to expel “racist elements” in its ranks. No sooner had Tea Party adherents and defenders angrily denied that such elements amounted to anything more than a few fringe nuts than Mark Williams, the spokesman and past chairman of the Tea Party Express, piped up. He slapped a “parody” on the Web — a letter from “colored people” to Abraham Lincoln berating him as “the greatest racist ever” and complaining about “that whole emancipation thing” because “freedom means having to work for real.”

Williams had hurled similar slurs for months, but now that the N.A.A.C.P. had cast a spotlight on the Tea Party’s racist elements, he was belatedly excommunicated by the leader of another Tea Party organization. In truth, it’s not clear that any group in this scattered movement has authority over any other. But one thing was certain: the N.A.A.C.P. was wrong to demand that the Tea Party disown its racist fringe. It should have made that demand of the G.O.P. instead.

Breitbart has never denied his motivation in publishing the excerpted videotape of Ms. Sherrod's speech was to respond to this NAACP action. And yes, the issues may have an even larger context. But the NAACP resolution is generally accepted as the starting point, and what the NAACP did was to declare some whites in America racists.

There the troubles began.

The merits of the NAACP claim aside, it's the question of power that's at issue. Racism has been defined as possible only for people who have power to use their prejudice against other "races" (the very term "race" is a 19th century shibboleth). It's rather hard to argue with that definition when you realize everyone publicly reacting to the term, and seeking desperately to redefine it, is white. The NAACP is publicly perceived, at least, as a black organization (in her speech, Ms. Sherrod lamented that the room she spoke to wasn't more racially diverse; indeed, that was central to her point). The Tea Parties are perceived as overwhelmingly white, and hardly charitable to the President's race. Shirley Sherrod uses the term "racism" against a white man (Breitbart) and Howard Kurtz, a white man, tut-tuts about such unseemliness.

E.J. Dionne defines the opposition to Obama as "racial," which is apparently a euphemism for "racist," because the opposition is clearly an effort to wield power based on the President's skin color. And, in the context in which Mr. Dionne used the term, it's hard to argue the President's opponent didn't show they had real power behind their words. After all, if somebody jumps when you say frog....

But Mr. Dionne can't seem to bring himself to say "racist" because that's, apparently, such a charged term. And besides, the people he'd be using it against are white, and they aren't Southern rednecks.

Frank Rich, as I pointed out below, avoids too much discussion of racism (fine; it's his column), while Bob Herbert, a black man, discusses both race and income, two issues still joined together in American culture as tightly as eggs and bacon or chocolate and vanilla. I can't get to Eugene Robinson's column on this issue (don't feel like registering with WaPo), but I detect a distinct difference between black and white observers of this issue, even when they are on the same political side. There is still a documentable discomfort among whites, especially middle-class and upper-class whites, about issues of race in this country. Is it guilt? Is it shame? Is it because of the hidden wound, the freedom and independence of this country which actually depended, for the first several hundred years (slavery in this country began almost simultaneously with Columbus) on denying both of those things to persons so other persons could lay claim to it?

Or is "racism" one more term that only "progressives" can be accused of?*

when I decided to leave the whole thing alone, because frankly I was tired of it and I wasn't sure I was still saying anything. Then I wandered over to Digby, where I found material like this (which Digby, in turn, had found):

I partly agree with the CCC. Though racism proper denotes an abhorrence of people because of their race which is largely absent from the Tea Party movement (and indeed in the CCC, if you follow their website), white people in the Tea Party are rightly sticking up for their own interests and resisting the genocidal depredations of the multiculturalists. To be sure, most Tea Partiers believe colorblindness is the ideal; I believe, however, that God has a place for all races in his divine plan. The white race is under an unprecedented threat of enslavement or demographic extinction, and rightly merits a defense by those of its number who appreciate its beauty and good qualities and want it to persist.

To the earlier question on the CCCs thoughts on Catholics, they have nothing against members of the Church founded by Jesus Christ, but are obviously upset with the USCCB and other clergy for mishandling the immigration issue to the point of effectually denying our Nation's sovereignty.

CCC, if you don't know, is the Council of Conservative Citizens, the lineal descendant of the old White Citizens Councils. The language here is the language I heard in my childhood, when a distinction was made between "prejudiced" (not so bad; meant you didn't like "black people," but you didn't use the "N" word, either), and "racists" (who hated black people). On such distinctions did we maintain our moral superiority, while keeping our very white foot on their very black necks. Or at least not encouraging much in the way of change, in what MLK called "Justice." The rest of that quote is just pure white supremacist racism, of course. One slides quickly from bad to worse, without every really passing "GO". Nothing, really, has changed.

Maybe that's all I had left to say.

*and no, Jeffrey Lord's argument doesn't make any sense on its face, or in its particulars.