and all the trees of the field shall clap [their] hands. 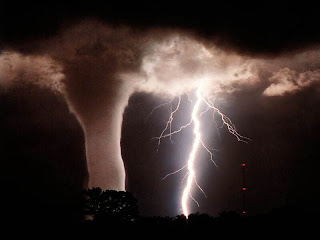 Give unto the LORD, O ye mighty,

worship the LORD in the beauty of holiness. Ps. 96.7-9
3 The voice of the LORD is upon the waters:

the God of glory thundereth:
the LORD is upon many waters.
4 The voice of the LORD is powerful;

yea, the LORD breaketh the cedars of Lebanon.
6 He maketh them also to skip like a calf;

the LORD shaketh the wilderness of Kadesh.
9 The voice of the LORD maketh the hinds to calve,

and discovereth the forests:
and in his temple doth every one speak of his glory.
10 The LORD sitteth upon the flood;

yea, the LORD sitteth King for ever.
11 The LORD will give strength unto his people;

the LORD will bless his people with peace.

I only imagine the climate of ancient Palestine, but I imagine storms didn't come with the frequency with which they visit the Texas coastal plains. Lately, though, we have been as dry as I always imagine Palestine, and today it was as hot: 103, surely a record for this early in June. There were rumors of thunderstorms, but we'd given up any hope of it, and when the first thunderclap rolled across the sky, there weren't enough clouds to make us think we weren't imagining things. It was followed by another, and then by rain drops as wet and fat and cold as frogs. And then it passed, as quickly as it came.

And that was it; except it wasn't. The sun came out, the skies cleared, the winds settled; then it began again. This time the wind roared, and the rain came in sheets, even as the sun beamed through the clouds. There were rainbows in the rainfall, right above my driveway. And the trees waved and twisted and clapped their hands. And what could you do but shout: "GLORY!"

My garage had to substitute for a temple; my isolation for all the people.

And right on time (30 minutes after the storm has passed) the National Weather Service predicts a storm is moving through the area, and we should beware.