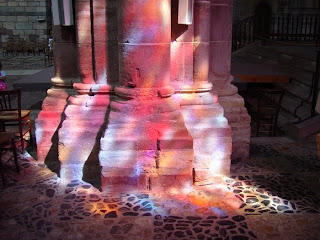 9:1 As he walked along, he saw a man blind from birth.

9:2 His disciples asked him, "Rabbi, who sinned, this man or his parents, that he was born blind?"

I'm always searching for the fundament in any issue, the foundation upon which ideas rest which nobody notices, like the ground or the air around us; but which shapes the discussion in ways that go entirely unnoticed.

On "Fresh Air" today Terry Gross interviewed Dr. David Ansell, who explained that he went into medicine to help people, and found medical school wasn't interested in that at all (any more than law school is interested in producing public defenders or making the law more available to the poor; they aren't disinterested in that, either, but bringing justice to the greater society isn't the telos of most legal educations). He explained that disease doesn't have an individual etiology, it has a social one. People get sick because of the world they live in, not just because of individual behaviors. Yet medical school, when Dr. Ansell was a student, was still focused on disease as an individual problem.

And I realized that's the nut of the debate over "Obamacare" and Medicare and even (albeit almost silently) Medicaid.

Dr. Ansell told horror stories of 4000 people waiting for colonoscopies in Cook County, Illinois, because they couldn't afford private ones. These were not, he said, diagnostic procedures; these were people with blood in their stool already. It is a stark example of how we already ration healthcare (as he pointed out later). But the "Ryan Plan" rests on the idea that individuals are responsible for their diseases, and disease should be treated individually, and so individuals alone are responsible for their health. If you are sick, it's your own damned fault.

I don't know how much of the cancer we suffer from in this country is due to carcinogens v. genetics, but the discussion has shifted away from carcinogens (the whole battle against cigarettes was based almost solely on that) and toward individual treatments and even individual causes (such as unfortunate parentage and, so, your genes). "Cures" like Interferon have vanished from the scene, along with any discussion about environmental causes of cancer. Unless research has proven this wrong by now, mesothelioma, for example, is a cancer caused only by exposure to asbestos. Asthma, not a cancer but a disease, is a disease that seems to be worse in the industrialized world. How do we treat it? As a society? No; with inhalers and drugs and on a case by case basis. Cancer is treated the same way; not as a problem of the environment we have created, but as an individual horror story that can only be surmounted by more chemicals ("hair of the dog") and radioactivity (ditto, perhaps) and surgeries, and then by an industry of support for the "patient" (many of whom may not be patient at all, nor should they be). We don't tackle it as a society, we push it off on the sufferer and their families. I've even read statements by public officials that health insurance should be provided by employers, not the government. So we push that away, too.

We shun responsibility like children who don't want to grow up.

Our diseases are not the result of individual choices or even solely our genetics. They are a result of choices made long before we were born, or far beyond our personal control. This, of course, has become the modern basis for horror. Now, instead of creating monsters like Dr. Frankenstein, or encountering evil in far off Transylvania, we are enslaved by powers that take control of us whether we like it or not. The theme of "Alien" is the same as the "Saw" movies: the worst horror is being at the whim of others, who don't care if you live or die, and who will inflict pain and death on you in ways you cannot stop. We recognize, at some level, the modern world we have created. At another, we refuse to accept that truth; and so climate change is a "myth" and cancer is a problem of finding the right treatment center for you. You are not alone, so long as you can find, and pay for, the right friends; friends who can also treat the disease you, and you alone, have.

There is something existential about disease. Tolstoy understood that; but then, so did the anonymous author of "Everyman." Death is individual, and so is suffering, so perhaps it is almost reasonable to assume disease is individual, too. But while "man is born to suffer as surely as birds fly upwards," we do not get our diseases in a vacuum, and we do not live on desert islands all our lives. But if we can treat your illness as an individual issue, then your healthcare is an individual issue, and it's a short step to deciding your health is none of my business.

When, of course it is. No man is an island. The funeral knell tolls for thee.

It's a simple shift in emphasis, from social to individual. If the problem is yours alone, or a sign of your disfavor with God, then society has no role to play and can only, as Auden said of history, "say 'Alas,' but cannot help nor pardon." And there you are: we have no responsibility for you, so why should we be burdened by you? "Mankind was my business!", Marley reminded Scrooge, but to this good day we remember Scrooge for weeping over his own misery, not for learning he was responsible for humankind. We still consider such problems individual matters, not matters for society at large. We learn the lesson we want to learn, we frame the problems and answers according to the frame that suits us. Is the problem how the government spends its money? Or that the government spends its money? Or is the problem that "There are a thousand hacking at the branches of evil to one who is striking at the root"?

We know disease is a public issue. We have clean water and clean food and sanitary sewage in order to control disease and prevent illness. We know these things, but we act like they don't matter anymore, we act like those problems have been solved and are no longer relevant. I've heard the same argument made about "Bronze Age tribal stories" to dismiss the teachings and wisdom of the Hebrew scriptures. Technology may have changed, but has human society? If we are soon to be god-like, as Michio Kaku most recently suggested, will we be the gods of our dreams, or the gods of Greece? Zeus, according to Ovid, mostly used his god-like powers to rape women. The Greek gods usually caused havoc among humans. Ask Homer. Ask Odysseus. Ask all the women raped by Zeus, starting with Leda ("A shudder in the loins engenders there/The broken wall, the burning roof and tower/And Agamemnon dead."). Will our god-like powers finally sweep away poverty and crime and disease? Or will they simply make it even easier for us to ignore or bedevil those who don't have the powers we have?

Our issues, our problems, are all public issues, social problems. But changing society requires changing us; and time and again, we refuse to do that. Far easier for me to demand a change in you, and when I can't effect that, to wash my hands of the problem. After all, if you were a sensible and good person, you wouldn't get sick; or be poor; or be in jail. How can I possibly be responsible? How can I possibly be my brother's keeper?

Even as his blood cries out from the ground.....

It's a simple shift of emphasis. So simple we could make it; if we only chose to. I heard a doctor once describe it as finding babies floating in a river, and doing all you could to fish them out as quickly as you can. But the effort is overwhelming; there are more babies coming down the river than you can rescue. Still, you continue to try. But why, asked the doctor, don't we go upstream, and stop the person who is throwing the babies in the river?

That is the situation we are in. And that is the way we are dealing with it. We are trying harder and harder to fish the babies out of the river. But we are overwhelmed. Some of us are tired, and don't want to save the babies anymore. It's their own fault they are in the river. Or God or the market (two conditions which often appear alike) meant for them to be there. Or something. Anyway, it's not our fault, and not our problem. Not anymore. Maybe we'll take care of the babies who are in the river now; but as for the ones coming down the stream?

Is this the country, the people, we are becoming?
Posted by Rmj at 8:52 AM