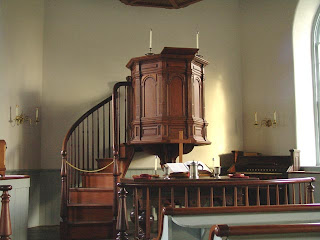 "Why is it," asked one of my elders the other day, "that your Sunday evening sermons are more pessimistic than your morning sermons?"  I think what he really meant is that they were more critical in analyzing life's problems.  I told him that I tried to give inspiration in the morning and education in the evening.

But the fact is that circumstance probably affects the quality of the message as much as purpose.  A full church gives me the sense of fighting with a victorious host in the battles of the Lord.  A half empty church immediately symbolizes the fact that Christianity is very much a minority movement in a pagan world and that it can be victorious only by snatching victory out of defeat.