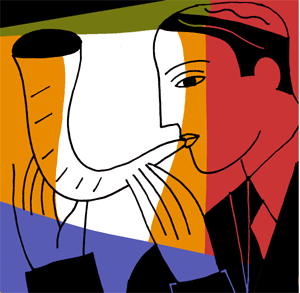 "You can't conceive, my child, nor I nor anyone,
the appalling strangeness of the mercy of God."
--Graham Greene

I said something below about imposing religious ideas on the non-religious, and the advent of Yom Kippur is my starting point for that observation.  Talk of the Nation devoted some time to the Jewish observance and the ideas of sin and atonement; the guests were a rabbi, an imam, and a Jesuit priest, and the discussion was uniformly excellent between them.  But first I think of the "Christian" holidays of Christmas and Easter, and even of Mardi Gras, which marks the end of Epiphany and beginning of Lent.  Those are widely observed holidays, or at least very widely known, but they commonly have as little to do with Christianity as a fish has to do with a bicycle.  Yom Kippur is distinctly Jewish, and distinctly related to the concepts of sin and atonement, as well as the nature of God.  Lent is similar, but far less widely observed among Christians.  But what was interesting to me was the very idea of "sin" in the first place.

Sin is a concept passed down in America through Puritanical hands and closely associated with an "angry God," thanks to the eloquence of Jonathan Edwards.  I'm hard pressed to condemn the Puritans, in part because they are part of my religious heritage through my ordination into the United Church of Christ.  I have a direct connection to them through the Congregationalist church which is a major historical root of the UCC.  But sin is so often, among Christians and those who know the term only from Christianity, a burden, a malaise, a source of shame and despair.  It doesn't have to be, although Christians since at least Augustine have treated it so.  As Krister Stendahl points out, if sin seems deeply connected to our Western sense of self, it's because the source of our self-consciousness (literally as well as the source of our shame/self-concern) is Augustine and his confessions.  Paul, if you can strip away your anachronistic lens placed over his letters by the saint of Hippo, has a clearly "robust conscience," and defies the sense of shame and despair that haunts more pious Christians nearly 2000 years later.  So if we are going to make sin a universal condition of all humankind, we have to discuss just what we mean by the term.

It isn't that we can't make sin a universal issue; it is more how we do it that concerns me.  To hear the rabbi discuss the tradition of atonement for Yom Kippur, I heard the echoes of a covenant behind it.  If Alberich is good enough to read this, perhaps he can add more information in the comments, because my knowledge here is admittedly fragmentary, and even my memory of what the rabbi outlined is fading away.  The practice, though, involved far more than prayer and confession in corporate worship (as almost every Protestant and Catholic does in weekly worship).  It involved activity, the basic thrust of which was to seek forgiveness and make amends before turning to God to ask for absolution.  This was, basically, the Muslim practice as well, but in the rabbi's description I heard the clear substrate of a covenantal idea, of being bound by the covenant with Abraham to others (perhaps even Gentiles.  Why not?), and owing them as much duty as you owed to God.

It started me thinking that religion today is declared to be a private practice, and that is the problem with it:  we want our religion to be private and personal, when of all things it should be the must public and corporate.  Not corporate in the meaning of a fiction of law, but corporate in the sense of corporeal, of lived in the world, and incorporated into daily life.  How many Christians prefer to leave their religion at the door of the church, to pick it up again like a hymnbook or a church bulletin on Sunday morning?  There is a problem, but I still maintain a slight one, in Christians behaving like Rick Perry:


On Tuesday he spoke on a conference call with fundamentalist Christian activist and former pastor Rick Scarborough as part of Scarborough’s “40 Days to Save America” campaign to inspire and organize religious right voters. Echoing sentiments he expressed in “Fed Up” and remarks he made at the Reliant event, Perry said the separation of church and state was a myth being used to drive “people of faith from the public arena.” Perry said America is engaged in “spiritual warfare” and that Religious Right activists who “truly are Christian warriors, Christian soldiers” need to stand up to “activist courts” and “President Obama and his cronies in Washington.”

“Satan runs across the world with his doubt and with his untruths and what have you,” Perry said, “and one of the untruths out there that is driven — is that people of faith should not be involved in the public arena.”

I think his words are the sheerest nonsense, but if he wants the people in the public arena to be only people of his version of faith, my best response is to show up in the arena with my version of faith; not to set mine aside so I can be a better citizen when I reach the agora.  And if I'm going to live my faith, my confession and repentance and atonement have be something more than what I offer to and ask from God in the privacy of my thoughts or in the repetition of a printed prayer.

Does that mean I should expect this of everyone else?  No, of course not.  But it was the rabbi who spoke of giving forgiveness as well as receiving the confession of sin, and that was the linchpin of the covenant, to me.  Of course, just because it is expected doesn't mean it is given, and just because two Christians, or two atheists for that matter, try to reconcile but one won't and reconciliation takes two, doesn't mean a covenant would fix it, or a covenant is broken.

A caller to the program said that people can forgive each other and learn to get along with each other without religion; that humankind knew apologies and forgiveness were necessary long before religion came along.  I'm not so sure about his history or his anthropology, but even taking him at face value and accepting the basis of his argument, the fact remains:  how many people will do that without some sense of the metaphysical, or the transcendent, of a covenant or a binding love of God or something beyond the need of two people to cooperate, to make forgiveness finally happen?  It is like the argument that religion is not needed to build hospitals, orphanages, homes for the elderly and the mentally challenged, places of refuge for workers forced to work far from home.  No, it isn't needed, but the German E&R church built all those things in the 19th century for fellow immigrants from what wasn't yet then Germany, for those who were strangers from foreign countries who spoke an almost common language and little more.  How many atheists did that, without first requiring a profit motive or a favorable tax law?

I have a book by a Jesuit priest that describes sin in terms of the American frontier of the 19th century.  Sin, as I recall him putting it, is either violating one of the rules of the town (for which the sheriff will harshly punish you); or sin is being in the wagon train, and wanting to turn back.  I like that second metaphor:  it places us in a journey, among others with a similar purpose, going to a destination that, like Abram in Genesis 12, we can't quite imagine.  And sin is not a rule we break, but a lack of faith in where we are going, and who is leading us there.  In terms of the Hebrew scriptures, it was the land flowing with milk and honey, which would be theirs so long as they were faithful to God; and the Torah gave them guidance (much more than that, but again, I'm no rabbi).  In the Christian scriptures, that destination is the kingdom of God, and the journey is not to a physical locality, but out among people.  People who believe as we do, and people who do not.  According to the letters of Paul, it's the people in the former category who actually give us the most trouble about where we are going, and how to get there, and how to behave along the way.

I'll have to leave it there.  Perhaps I can return when I am more coherent, or more sure of what I want to say.  But I won't get any further just now.