Why doth anyone rage? 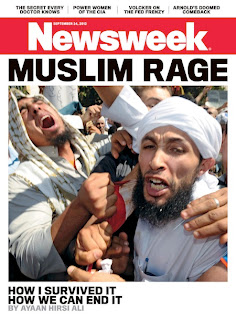 I heard on the radio today (probably BBC News) that it is recorded (in the Koran?) that the prophet Mohammad himself was attacked and vilified in his life time; his response sounded almost Christian.  He blessed those who persecuted him, and forgave them their treatment of him.

That is entirely the thesis of Neibuhr's analysis:  an individual can be moral on their own behalf.  But can they be moral on behalf of others?  It may be right for me to accept insult of my Lord by others; indeed, there is nothing you could say to me that would enrage me enough to attack you, if your insults were directed toward Jesus of Nazareth.

But if they were directed toward my wife?  My daughter?  My brother?  My parents?  My friends?  At what point am I immoral, or at least unfeeling, to accept insults on behalf of others?

Let us posit that I should.  Who would blame me if I didn't?  If you felt any sympathy for any of the groups I've named, would you feel sympathy for my plight?  Or would you wonder, instead, about my self-esteem, my courage, my willingness to oppose evil even if it is merely insults to those I love and care about?  Might you even wonder how much I love and care about them?

It is not an unanswerable situation.  It is not a paradox without a resolution.  But the resolution is hard; it is almost superhuman one, it requires almost a saint-like composure and an almost inhuman withdrawal from the affairs of everyday life.  If I did it, who would understand me?  If I fought back, who would blame me?

It is right for Muslims to do as the Prophet taught and did.  It is right for Christians to do as Jesus and Paul taught and did.  But how far can we go in expecting others do to what we would not do?  We might not be as prompt to explode in public anger at insults to Jesus, we Christians.  But is that because we are morally superior to the angry Muslims on our TeeVee screens?  Or is it because we really don't care as much about our religious figures as they do?