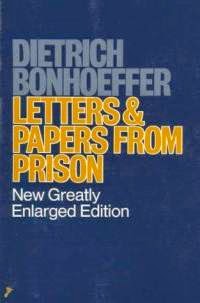 The movement began about the thirteenth century (I”m not going to get involved in an argument about the exact date) towards the autonomy of man (in which I should include the discovery of the laws by which the world lives and deals with itself in science, social and political matters, art, ethics, and religion) has in our time reached an undoubted completion. Man has learnt to deal with himself in all questions of importance without recourse to the ‘working hypothesis’ called ‘God.’ In questions of science, art, and ethics this has become an understood thing at which one now hardly dares to tilt. But for the last hundred years or so it has also become increasingly true of religious questions: it is becoming evident than everything gets along without ‘God’—and, in fact, just as well as before. As in the scientific field, so in human affairs generally, ‘God’ is being pushed more and more out of life, losing more and more ground.

Roman Catholic and Protestant historians agree that it is in this development that the greatest defection from God, from Christ, is to be seen; and the more they claim and play off God and Christ against it, the more the development considers itself to be anti-Christian. The world that has become conscious of itself and the laws that govern its own existence has grown self-confident in what seems to us to be an uncanny way. False developments and failures do not make the world doubt the necessity of the course that it is taking, or of its development; they are accepted with fortitude and detachment as part of the bargain, and even an event like the present war is no exception. Christian apologetic has taken he most varied forms of opposition to this self-assurance. Efforts are made to prove to a world thus come of age that it cannot live without the tutelage of ‘God.’ Even though there has been surrender on all secular problems, there still remain the so-called ‘ultimate questions’—death, guilt—to which only ‘God’ can give an answer, and because of which we need God and the church and the pastor. But what if one day they no longer exist as such, if they too can be answered ‘without God’? Of course, we now have the secularized offshoots of Christian theology, namely existentialist philosophy and the psychotherapists, who demonstrate to secure, contented, and happy mankind that it is really unhappy and desperate and simply unwilling to admit that it is in a predicament about which it knows nothing and from which only they can rescue it. Wherever there is health, strength, security, simplicity, they scent luscious fruit to gnaw at or to lay their pernicious eggs in. They set themselves to drive people to inward despair, and then the game is in their hands. That is secularized methodism. And whom does it touch? A small number of intellectuals, of degenerates, of people who regard themselves as the most important thing in the world, and who therefore like to busy themselves with themselves. The ordinary man, who spends his everyday life at work and with his family, and of course with all kinds of diversions, is not affected. He has neither the time nor the inclination to concern himself with his existential despair, or to regard his perhaps modest share of happiness as a trial, a trouble, or a calamity.

The attack by Christian apologists on the adulthood of the world I consider to be in the first place pointless, in the second place ignoble, and in the third place unchristian. Pointless, because it seems to me like an attempt to put a grown-up man back into adolescence, i.e., to make him dependent on things on which he is, in fact, no longer dependent, and thrusting him into problems that are, in fact, no longer problems to him. Ignoble, because it amounts to an attempt to exploit man’s weakness for purposes that are aline to him and to which he has not freely assented. Unchristian, because it confused Christ with one particular stage in man’s religiousness, i.e., with a human law.

[There follows a fascinating but particular discussion of Protestant teachings from an historical perspective which may be a bit opaque if you don’t know all the players (Heim, Althaus, Tillich, Barth) that comes down to this observation about Bultmann:]

Bultmann seems to have somehow felt Barth’s limitations, but he misconstrues them in the sense of liberal theology, and so goes off into the typical liberal process of reduction—the ‘mythological’ elements of Christianity are dropped, and Christianity is reduced to its ‘essence’—My view is that the full content, in clouding the ‘mythological’ concepts, must be kept—the New Testament is not a mythological clothing of a universal truth; this mythology (resurrection, etc.) is the things itself—but the concepts must be interpreted in a way as to not make religion a pre-condition of faith (cf. Paul and circumcision). Only in that way, I think will liberal theology be overcome (and even Barth is still influenced by it, though negatively) and at the same time its the question to be ultimately taken up and answered….Thus the world’s coming of age is no longer an occasion for polemics and apologetics, but is now really better understood than it understand itself, namely on the basis of the gospel and in the light of Christ.