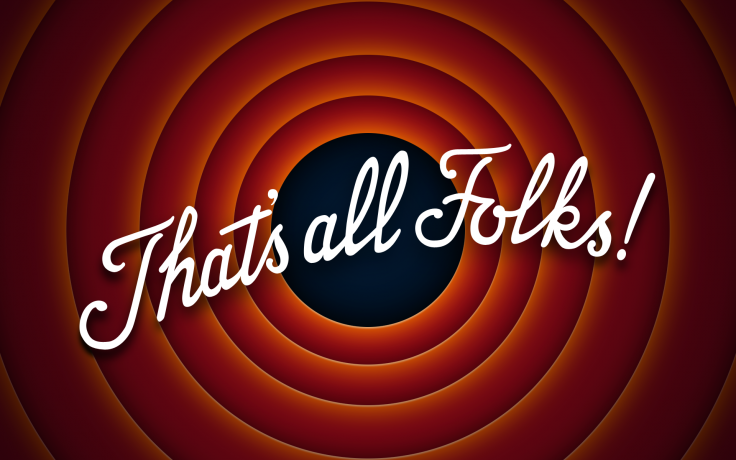 I grew up on Looney Tunes.  Born 10 years after the last of the best of them were made, mostly what I got from them were cultural references to Hollywood and popular music and World War II that played out before me like a time capsule.  I remember there was a lot of violence in them, but we didn't call it violence then, we called it "cartoons."

I learned what anvils were; and shotguns; TNT and gremlins; Hollywood tag lines from the '40's and even a song debuted by Doris Day in 1947 ("It's Magic.")

I even remember being dropped off at a movie theater for kids in a shopping mall in Dallas, a small room with concrete floors and wooden benches that ran cartoons and Li'l Rascals shorts on a continuous loop from a movie projector about 20 feet away from the screen.  I mean, I grew up saturated with that stuff (there's no small amount of "violence" in the Li'l Rascals, either.)

Now Slate tells me we wouldn't tolerate that level of violence in cartoons today.  Perhaps not.  It has all moved to adult fare.  As much as I liked No Country for Old Men and admired the film made of it, the violence in it is the violence of a cartoon.  The villain in the story, a man more sociopathic and endowed with superhuman powers than any traditional version of Satan (or than Milton's supreme version, for that matter), engages in violence that is rivaled only by Bugs Bunny.  It is absurd violence; it is outrageous violence; because like a cartoon, it is violence without consequence.  It is the kind of violence which would chill the most hardened community into quaking terror, that would be blared across local TV news and certainly get the attention of an entire state.  And yet, in the story, nobody seems to know its going on, even when it happens in motel rooms and on city streets.  The violence never produces community outrage, it just produces the lone presence of Tommy Lee Jones.

No, the characters don't jump up and reanimate themselves, as the characters do in cartoons, but they might as well.  Death seems to matter only to the few characters who actually have names in the film.  The rest of the world might just as well have been raptured, leaving the audience in hell on earth.

Stanley Kubrick, I now learn, filmed McCarthy's Blood Meridian just before the director died.  Apparently it's violent enough to make Quentin Tarantino reconsider watching it (and speaking of a director who engages in cartoon violence....).  It is certainly not a movie for children (is any Kubrick movie?).  So clearly what has happened is we've removed the cartoon violence for our children (even the most action-oriented superhero cartoons are anodyne fare compared to a Looney Tunes offering), but we've kept it for ourselves.

Which is kinda funny, really.

The men who made the Looney Tunes cartoons that are the most famous, said they were mostly trying to entertain themselves.  Is that how we explain our movies now, even as we make sure our cartoons teach our children more approved lessons?

Do as I say, not as I do.  Is that the basis for our relationship to children in our culture, now?