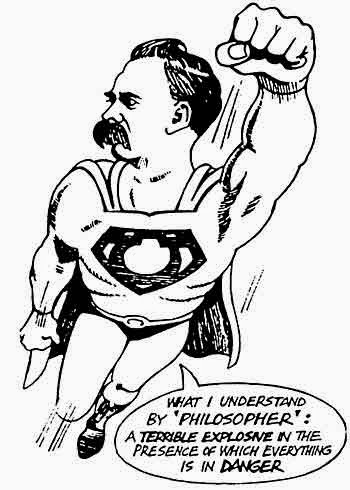 So I've been frittering away my time watching "X-Files" on Netflix.  It's like re-reading a favorite story collection:  even the not-so-good ones are still entertaining, and you can't stop until you finish the whole collection.

I came across this quote from Nietzsche via NTodd, which nicely sums up the central conceit of "The X-Files":

Against that positivism which stops before phenomena saying, "There are only facts," I should say:  no, it is precisely facts which do not exist, only interpretations....


Which would also be just the thing to throw into a roomful of squabbling atheists, I suppose.  But the basic premise of "X-Files" is that phenomena which leave undeniable physical evidence behind are always re-interpreted into a schema that disallows the nature of the phenomena from being apprehended.  For example, in one episode involving the series signature alien conspiracy, a series of records found on several computers across the country (cloned aliens, or something; just go with it) reveals records that are marked to proteins used as tags via smallpox vaccinations (because everyone has one; or nearly everyone).  The protein itself is even visualized, and found to be unique for individuals.

This is either a curiosity, or evidence of a vast cataloging of humanity.  It's meant to be the latter, of course, but that interpretation cannot be accepted (why should it be?), so the facts themselves are simply ignored until a "rational" interpretation can be applied.

Merrily we roll along.

You can make the extreme counter-argument, that to accept interpretations requiring so much acceptance of so many extreme conclusions (like a catalog of all smallpox vaccinated humans on the planet via a protein tag unique to each individual) is to accept absurdity, and then what can be true?  Or you can note that the ground beneath your feet is really not as stable as the positivists would have it be.

Which is really still the interesting option.  Those "atheists" arguing at Salon about who the true atheists are all insist that skepticism (have they read Descartes?) and "reason" will set you free to know the truth!

But then there is Pilate's question:  "What is truth?"

And that's subject to interpretation, isn't it?