Not even slow sculpture 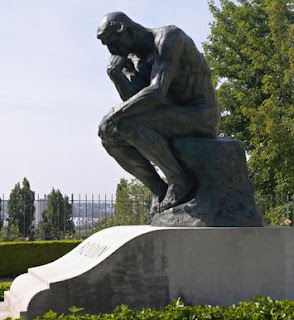 What is the act of understanding?

Can I make you understand?  How?  How would I do that?

I'm listening to Terry Gross interview the Rev. Rob Shenck about his anti-abortion activism, and how his opinions have changed.  He just said, in paraphrase, that he came to realize his activism was just leading to seeking one more victory, one more law, one more exertion of power (my words, there) over others, and in a long period of prayerful reflection he came to realize he was pursuing power, not the Gospel he loved.  Again, I don't mean to capture perfectly what he said but to focus on the nature of "understanding."  Shenck started with one version of understanding:  that abortion was wrong and must be opposed through law however possible; and ended with another:  that the choice of abortion is between an individual and God (he's still a Christian, after all).  And what he was describing in my poor paraphrase was the process of understanding that changed his, well....understanding.

So, what is the act of understanding?  And how can I make you change it?

I have a friend in ministry who just mentioned a church member, a "good guy," who has told my friend that he's started carrying a gun in case the "black kids" try to "start something."  "Ugh," my friend said.  I know my friend well; he is a good person.  I don't doubt this third party is a good person, too.  But how do you get him to understand he is wrong?  What is the act of understanding, in the first place?

Were I that man's pastor, I might preach about the power of powerlessness, about the faith in God that leads you away from fear of others, especially those you "other" by race.  Would that change his understanding?  I doubt it.  That would require him to understand as I do, and I don't quite understand why he thinks as he does.  Oh, I think I do.  I think I'm in a superior position to him, and he needs to "learn" to "understand" as I do, because my understanding is better than his.  If you've ever tried that with somebody, how did that work out for you?

What is the act of understanding?  As a pastor, I would feel compelled to try to understand that man's point of view, not to get him to understand mine.  I would still hold to mine, but how do I get him to understand it?  At what point does he?  Consider the example of the parables.  Most of them were taught to me as allegories.  It was a hermeneutic, a way of interpretation that was simple because it had the weight of tradition behind it, and because the interpretive work had already been done.  No need to re-examine the stories:  just take the explanation and move on.  So the story of the 99 sheep is a wonderful story about how much God loves us, and what God will do to save us (from dangers metaphysical or physical, depending on your theology).  Nobody worried about the insanity of leaving 99 sheep unprotected to rescue one.  What are the 99?  Chopped liver? If you think you're the one sheep, it's comforting.  Now think of yourself as one of the 99.

Or the woman who lost a coin, and burned lamp oil all night to find it rather than waiting for the sunrise.  Having found the coin (and used up the oil), she then throws a party, spending the worth of the coin in celebration (probably more than the coin's worth, if you count the oil).  Nobody ever pointed that obvious issue out to me.

Or the pearl of great price, which the merchant buys by selling everything he owns.  Now what?  You can't eat a pearl, you can't live in it, you can't trade it for clothes without losing the pearl.  What was the allegory again?  Something to do with attaining heaven, if I recall; although that's not in the parable at all, but it makes more sense than the parable does.

But the parables weren't meant to be understood; that's another hermeneutic, and one I find more applicable.  The parables weren't meant to be allegories, they were meant to be confounding.  They were meant to break understanding.  The kingdom of God is like a mustard plant that rivals the cedars of Lebanon:  except mustard was a weed, and it was a bush, at best, not a towering tree.  What the heck?  Worse, the kingdom of God is like an assassin who practices with the knife all night, then goes out at morning ready to commit the deed.  What?

What is the act of understanding?  Is it merely accepting what you find acceptable, what you've been told is acceptable, and rejecting (conversely) what you deem objectionable?  And how do you understand?  I can tell you as a teacher that I work very hard to make ideas understandable to my students; but whether or not they understand is up to them.  I cannot make them understand; I cannot force their understanding.  I cannot understand for them, or enter into their act of understanding and correct it or make it work for them.  It is a personal pursuit, dare I say an existential one?  Rev. Shenck understood the failure of his Christian humility (again, my terminology, not his) over time, and in prayerful reflection (his words there).  Could anyone have made him understand that?  Or did he have to understand it himself?

It can't be done for you.  You can only do it yourself.  And like love, you'll know it when you experience it.  But it is not the same thing as thinking you understand; and it is not an act of will.  If anything, it is a revelation, an insight you don't control, cannot wish on yourself, cannot make yourself have.

Think of it as the power of powerlessness.